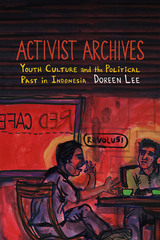 In Activist Archives Doreen Lee tells the origins, experiences, and legacy of the radical Indonesian student movement that helped end the thirty-two-year dictatorship in May 1998. Lee situates the revolt as the most recent manifestation of student activists claiming a political and historical inheritance passed down by earlier generations of politicized youth. Combining historical and ethnographic analysis of "Generation 98," Lee offers rich depictions of the generational structures, nationalist sentiments, and organizational and private spaces that bound these activists together. She examines the ways the movement shaped new and youthful ways of looking, seeing, and being—found in archival documents from the 1980s and 1990s; the connections between politics and place; narratives of state violence; activists' experimental lifestyles; and the uneven development of democratic politics on and off the street. Lee illuminates how the interaction between official history, collective memory, and performance came to define youth citizenship and resistance in Indonesia’s transition to the post-Suharto present.
AUTHOR BIOGRAPHY
Doreen Lee is Assistant Professor of Anthropology at Northeastern University.
REVIEWS
"... the main strength of Activist Archives is that it raises important questions by not providing all the answers. In this way, it invites frequent re-reading, creating a richer understanding of the micropolitics of student activism upon each re-read."

“Activist Archives can be called a definitive work that will be prized as perhaps the best ‘biography’ of a generation of Indonesian urban activism.”

“Activist Archives is an important exploration of the 1998 Indonesian student movement and its ongoing influence, adding greatly to our knowledge of student movements and democratization in postcolonial settings.”

"Activist Archives undoubtedly offers us a new approach to the analysis of Reformasi, student and youth politics in the recent history of Indonesia. It provides new insights, enriched via an extensive use of fieldwork and archival material."

“Activist Archives is undoubtedly a significant contribution to the anthropological analysis of youths and political culture in modern Indonesian history.”

“A valuable expansion. Activist Archives should be of interest to students and other scholars from a range of disciplines concerned with the ephemerality and endurance of democratic transitions.”

A Note about Names  xvii