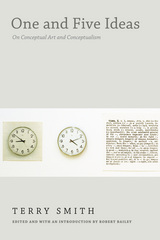 In One and Five Ideas eminent critic, historian, and former member of the Art & Language collective Terry Smith explores the artistic, philosophical, political, and geographical dimensions of Conceptual Art and conceptualism. These four essays and a conversation with Mary Kelly—published between 1974 and 2012—contain Smith's most essential work on Conceptual Art and his argument that conceptualism was key to the historical transition from modern to contemporary art. Nothing less than a distinctive theory of Conceptual and contemporary art, One and Five Ideas showcases the critical voice of one of the major art theorists of our time.
AUTHOR BIOGRAPHY
Terry Smith is Andrew W. Mellon Professor of Contemporary Art History and Theory at the University of Pittsburgh and Professor in the Division of Philosophy, Art, and Critical Thought at the European Graduate School. He is the author of several books, including Making the Modern: Industry, Art, and Design in America and What Is Contemporary Art?
Robert Bailey is Assistant Professor of Art History at the University of Oklahoma and the author of Art & Language International: Conceptual Art between Art Worlds, also published by Duke University Press.
REVIEWS
-- Boris Groys, author of In the Flow