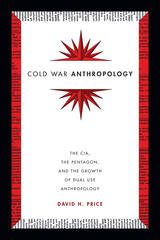 In Cold War Anthropology, David H. Price offers a provocative account of the profound influence that the American security state has had on the field of anthropology since the Second World War. Using a wealth of information unearthed in CIA, FBI, and military records, he maps out the intricate connections between academia and the intelligence community and the strategic use of anthropological research to further the goals of the American military complex. The rise of area studies programs, funded both openly and covertly by government agencies, encouraged anthropologists to produce work that had intellectual value within the field while also shaping global counterinsurgency and development programs that furthered America’s Cold War objectives. Ultimately, the moral issues raised by these activities prompted the American Anthropological Association to establish its first ethics code. Price concludes by comparing Cold War-era anthropology to the anthropological expertise deployed by the military in the post-9/11 era.
AUTHOR BIOGRAPHY
David H. Price is Professor of Anthropology at Saint Martin’s University. He is the author of Threatening Anthropology: McCarthyism and the FBI’s Surveillance of Activist Anthropologists and Anthropological Intelligence: The Deployment and Neglect of American Anthropology in the Second World War, both also published by Duke University Press, and Weaponizing Anthropology: Social Science in Service of the Militarized State.
REVIEWS
"Others have written on the entanglement of the social sciences with the military-intelligence complex, but none as energetically, from as many angles, or with as sensitive an eye for connections and overarching themes. ... ? Just as [Price] insists that HTS matters less than the underlying trends it represents, he cares less about the dramas of individual anthropologists in Cold War Anthropology and more about the subtle, systemic changes throughout the field—changes that threatened to make the discipline itself a security-state collaborator, sucking in individual researchers without their full knowledge."

"In the course of twelve years Price has written three books which have helped redefine anthropology’s understanding of itself. And now, with Cold War Anthropology, Price brings his massive, precedent-make (and -busting) history of anthropology and American power to a close. It’s a defining moment in the history of anthropology, and deserves wide attention. . . . We have much to learn from our discipline’s recent past, and thanks to David Price we have the opportunity to see our field as it really was, warts and all. The stories in this book, and the issues that it raises, need to be discussed by the discipline as a whole."

"Readers will benefit from Price’s careful attention to the impact of funding streams on scholarly decision-making, his dedication to amassing hard-to-locate source material, and his cogent moral compass."

"Cold War Anthropology restarts a conversation that should have never stopped. Anthropologists unaware of their discipline’s history will no
doubt find its lists of CIA and military projects eye-opening. Veterans of campaigns to rid the discipline of ties to the military and intelligence agencies will appreciate its recounting of battles lost and won within the AAA. Historians of science, too, have much to learn from the book’s methodology, especially its use of FOIA applications and tracings of blown CIA fronts."

"Cold War Anthropology forces the reader to confront in blunt detail the ways in which ethnographic work exists in tandem with political-economic forces, especially the agendas of funding bodies and special interests. It is a book I encourage anthropologists everywhere to read, but, more importantly, to discuss its implications with colleagues and students."

"With regard to US anthropology, perhaps no other scholar has done more to unsettle the by now defunct representation of the anthropologist as hero than David H. Price."

-- Sindre Bangstad Anthropology of This Century

"Price’s work has been marked by extensive use of governmental archives, including many sources declassified through the Freedom of Information Act. Simply bringing this information to light should be reckoned as a major achievement....Price has written, if not a fully sufficient book (who has?), then a profoundly necessary one that challenges what American anthropology has been and what it remains."

"Cold War Anthropology is an exceptionally valuable book, based on impressive scholarship. It deserves the thoughtful attention of anthropologists interested in where their discipline has been and where it may be headed."

"Historians of anthropology will welcome this volume, but it is relevant for every anthropologist working today. . . . We have much to learn from our discipline’s recent past, and thanks to David Price we have the opportunity to see our field as it really was, warts and all. The stories in this book, and the issues that it raises, need to be discussed by the discipline as a whole."

"Price critically analyzes the rapid growth of American anthropology during the Cold War ... [and] masterfully contextualizes these tranformative years in anthropology."

"The publication of David Price’s Cold War Anthropology concludes a trilogy of volumes that, taken together, constitute one of the most important and unprecedented contributions to the intellectual and political history of American anthropology."

"Price has gone to extensive lengths using the FOIA to secure previously secret documents that complement his comprehensive survey of open source material and the secondary literature. No stone is left unturned, no shallow defense of complicity left unchallenged."

"This is a work of superb and relevant scholarship that deserves to be read and heeded by every undergraduate student let alone scholars across the anthropological discipline. It is a moral call to examine the nature and value of knowledge and of conducting independent research rather than following the pathways opened up by the imperial state."

"David Price is convincing; his arguments are nuanced and reveal the breadth and degree of US anthropology’s involvement in CIA and Pentagon efforts."

4. After the Shooting War: Centers, Committees, Seminars, and Other Cold War Projects  81

5. Anthropologists and State: Aid, Debt, and Other Cold War Weapons of the Strong  109

6. Cold War Anthropologists at the CIA: Careers Confirmed and Suspected  143

11. The AAA Confronts Military and Intelligence Uses of Disciplinary Knowledge  276

13. Anthropologists for Radical Political Action and Revolution within the AAA  323