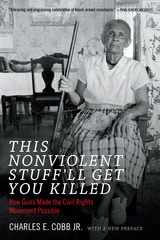 This Nonviolent Stuff'll Get You Killed: How Guns Made the Civil Rights Movement Possible
by Charles E. Cobb Jr.
Duke University Press, 2015
Paper: 978-0-8223-6123-7
Visiting Martin Luther King Jr. during the Montgomery, Alabama, bus boycott, journalist William Worthy almost sat on a loaded pistol. "Just for self-defense," King assured him. It was not the only weapon King kept for such a purpose; one of his advisors remembered the reverend’s Montgomery, Alabama, home as "an arsenal." Like King, many ostensibly "nonviolent" civil rights activists embraced their constitutional right to self-protection—yet this crucial dimension of the Afro-American freedom struggle has been long ignored by history. In This Nonviolent Stuff’ll Get You Killed, Charles E. Cobb Jr. recovers this history, describing the vital role that armed self-defense has played in the survival and liberation of black communities.  Drawing on his experiences in the civil rights movement and giving voice to its participants, Cobb lays bare the paradoxical relationship between the nonviolent civil rights struggle and the long history and importance of African Americans taking up arms to defend themselves against white supremacist violence.
AUTHOR BIOGRAPHY
Charles E. Cobb Jr. is a former field secretary for the Student Nonviolent Coordinating Committee and has taught at Brown University. An award-winning journalist, he is an inductee of the National Association of Black Journalists Hall of Fame. Cobb lives in Jacksonville, Florida.
REVIEWS
"A frank look at the complexities and contradictions of the civil rights movement, particularly with regard to the intertwined issues of nonviolence and self-defense. . . . Thought-provoking and studded with piercing ironies."

"[A] bracing and engrossing celebration of black armed resistance."

"Cobb's long-essay format brings the Freedom Movement to life in an unexpected way, shaking up conventional historical views and changing the conversation about individual freedom and personal protection that continues today. . . . A nuanced exploration of the complex relationship between nonviolent civil disobedience and the threat of armed retaliation."

"Cobb . . . reviews the long tradition of self-protection among African Americans, who knew they could not rely on local law enforcement for protection. . . . Understanding how the use of guns makes this history of the civil rights movement more compelling to readers, Cobb is nonetheless focused on the determination of ordinary citizens, women included, to win their rights, even if that meant packing a pistol in a pocket or purse."

"In this challenging book, Charles Cobb, a former organizer, examines the role of guns in the civil rights movement."

"Cobb brilliantly situates the civil rights movement in the context of Southern life and gun culture, with a thesis that is unpacked by way of firsthand and personal accounts."

"[A] revelatory new history of armed self-defense and the civil rights movement."

"This book will have readers who might have nothing else in common politically reaching for a copy."

"Students at a high school or college level would find the book both a fascinating read and a useful tool for learning about civil rights activism. For students in a survey course on United States history, or undergraduates in a U.S. history course for up and coming history majors, This Nonviolent Stuff’ll Get You Killed would be a valuable resource in both how to write compelling history and how to explore themes, such as civil rights history, that have been well traveled before."

"Cobb’s book extends beyond the subject of self-defense and violence to provide an enhanced understanding of community organizing yesterday and today in the freedom struggle for a more inclusive and progressive society."

Preface to the Paperback Edition: More Than a Gun Story  xv