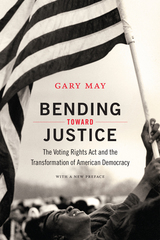 Bending Toward Justice: The Voting Rights Act and the Transformation of American Democracy
by Gary May
Duke University Press, 2015
Paper: 978-0-8223-5927-2
A vivid and fast-paced history, Gary May's Bending toward Justice offers a dramatic account of the birth and precarious life of the 1965 Voting Rights Act. It is an extraordinary story of the intimidation and murder of courageous activists who struggled to ensure that all Americans would be able to exercise their right to vote. May outlines the divisions within the Civil Rights Movement, describes the relationship between President Johnson and Martin Luther King Jr., and captures the congressional politics of the 1960s. Bending toward Justice is especially timely, given that the Supreme Court's decision in Shelby County v. Holder in 2013 invalidated a key section of the Voting Rights Act. As May shows, the fight for voting rights is by no means over.
AUTHOR BIOGRAPHY
Gary May is Professor of History at the University of Delaware. He is the author of The Informant: The FBI, the Ku Klux Klan and the Murder of Viola Liuzzo.
REVIEWS
-- Louis Menand The New Yorker


Prologue: The Most Powerful Instrument ix

Preface to the Paperback Edition xxiii