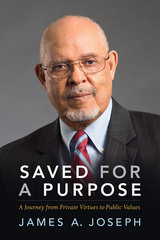 The son of a minister, James A. Joseph grew up in Louisiana’s Cajun country, where his parents taught him the value of education and the importance of serving others. These lessons inspired him to follow a career path that came to include working in senior executive or advisory positions for four U. S. Presidents and with the legendary Nelson Mandela to build a new democracy in South Africa. Saved for a Purpose is Joseph’s ethical autobiography, in which he shares his moral philosophy and his insights on leadership.

In an engaging and personal style, Joseph shows how his commitment to applying moral and ethical principles to large groups and institutions played out in his work in the civil rights movement in Alabama and as a college chaplain in California in the turbulent 1960s. His time later as vice president of the Cummins Engine Company provided an opportunity to promote corporate ethics, and his tenure as Under Secretary of the Interior in the Carter Administration underscored the difficulty and weight of making the right decisions while balancing good policy analysis with transcendent moral principles.

In 1996 President Clinton selected Joseph to become the United States Ambassador to South Africa. His recollections of working with Nelson Mandela, whom he describes as a noble and practical politician, and his observations about what he learned from Desmond Tutu and others about reconciliation contain some of the book’s most poignant passages.

Saved for a Purpose is unique, as Joseph combines his insights from working to integrate values into America’s public and private sectors with his long engagement with ethics as an academic discipline and as a practical guide for social behavior. Ultimately, it reflects Joseph’s passionate search for values that go beyond the personal to include the ethical imperatives that should be applied to the communal.
AUTHOR BIOGRAPHY
James A. Joseph is Professor Emeritus of the Practice of Public Policy at Duke University. Joseph served as the United States Ambassador to South Africa from 1996 to 2000, and as the Under Secretary of the United States Department of the Interior from 1977 to 1981. He was the President and CEO of the Council on Foundations, Vice President of the Cummins Engine Company, and served as Chaplain of the Claremont Colleges. He is the recipient of numerous honorary degrees and awards, including the Order of Good Hope, South Africa’s highest award to a citizen of a foreign country. Joseph is also the author of Leadership as a Way of Being, Remaking America: How the Benevolent Traditions of Many Cultures are Transforming Our National Life, and The Charitable Impulse: Wealth and Social Conscience in Communities and Cultures Outside the United States.
REVIEWS
"Saved for a Purpose is a thoughtful and dignified analysis of moral and ethical leadership, timeless life lessons—nuggets of wisdom we would be wise to consider. We can hope that a more humanitarian approach and a cohesive code of ethics and morality would make for a less volatile world."

Prologue: A Plane Crash in the South Pacific  1

I. The 1950s: The Genesis of Moral Consciousness

1. Growing Up Black in Cajun Country 13

5. Alabama: The Search for an Ethic of Protest  54

11. From Activist to Diplomat: Race and Reconciliation in South Africa  177

13. Ethics and Statecraft : What I Learned from Nelson Mandela  214

16. A Lexicon of Public Values: What the Virtuecrats Did Not Tell Us  264