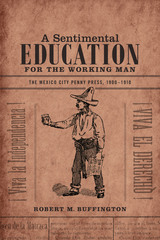 In A Sentimental Education for the Working Man Robert Buffington reconstructs the complex, shifting, and contradictory ideas about working-class masculinity in early twentieth-century Mexico City. He argues that from 1900 to 1910, the capital’s satirical penny press provided working-class readers with alternative masculine scripts that were more realistic about their lives, more responsive to their concerns, and more representative of their culture than anything proposed by elite social reformers and Porfirian officials. The penny press shared elite concerns about the destructive vices of working-class men, and urged them to be devoted husbands, responsible citizens, and diligent workers; but it also used biting satire to recast negative portrayals of working-class masculinity and to overturn established social hierarchies. In this challenge to the "macho" stereotype of working-class Mexican men, Buffington shows how the penny press contributed to the formation of working-class consciousness, facilitated the imagining of a Mexican national community, and validated working-class men as modern citizens.
AUTHOR BIOGRAPHY
Robert M. Buffington is Associate Professor of Women and Gender Studies at the University of Colorado, Boulder. He is the author of Criminal and Citizen in Modern Mexico.
REVIEWS
"For historians of all fields, this book serves as an excellent model for how to read and analyze a variety of print sources, particularly the visual image. Buffington skillfully weaves multiple theoretical approaches, a mastery of Mexican historiography, and a careful and reliable interpretation of primary sources to produce a phenomenal book that is a must read for any scholar of journalism or Latin American history."

"[Buffington] is an insightful and sensitive observer of contemporary Mexican working-class culture, its language rhythms and word play, and its gendered norms and stinging, 'self-mocking' satire that few historians can match, perhaps none."

"[A] beautifully written book, theoretically sophisticated yet unburdened by jargon. Few authors transport their readers to the streets of early twentieth-century Mexico City as eﬀectively as Buﬃngton does."

"[W]ith A Sentimental Education for the Working Man, Buffington bravely interrogates not a few of the interpretative commonplaces surrounding the Porfiriato, Mexican masculinity, and the working class. . . . [T]he text should be praised for opening up new discussions among scholars of Mexico from a range of fields."

"Buffington makes an excellent case for the vital historical importance of the penny press.... [T]his is a readable and informative treatment of the working-class during an important period in Mexican history."

"This is a nuanced and detailed study in which Buffington travels many avenues, eloquently it must be said, but the clearest direction of travel is in its commitment to putting aside the disciplinary projects of the modernising state, its agents and the liberal bourgeoisie that aimed to shape the psychology of the working man, and exploring instead the 'alternative sentimental education' that workers gained themselves from their own narrative media."

"For readers who have ever been embarrassed by their ignorance of Porfirian workers’ slang, help is finally at hand. Robert Buffington’s exploration of the penny press that targeted Mexico City’s popular classes at the end of the 19th century is a complex and ambitious work—the ambition is reflected in the title—resting on uncommonly accomplished textual analyses."

"Buffington offers richly layered analyses of the cultural politics at work in texts and images that a less sophisticated historian might dismiss as simply comic sketches. The overall effect is stunning. Buffington succeeds in recasting the political world of urban Mexico on the eve of revolution . . . . He writes beautifully, and his translations come across as effortless. The book deserves a wide readership."

"Buffington’s monograph is an important contribution to Porfirian cultural studies. Buffington’s writing is crisp, fresh, and devoid of the difficult theoretical somersaults that characterized his earlier writing. In this approachable yet sophisticated analysis, he engages the literature on media studies, liberalism, labor history, and cultural and gender studies to produce a rich, provocative text."

3. The Apotheosis of the Working Man 101

5. Don Juan and the Troubled Birth of Modern Love 169