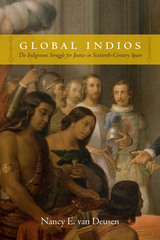 In the sixteenth century hundreds of thousands of indios—indigenous peoples from the territories of the Spanish empire—were enslaved and relocated throughout the Iberian world. Although various laws and decrees outlawed indio enslavement, several loopholes allowed the practice to continue. In Global Indios Nancy E. van Deusen documents the more than one hundred lawsuits between 1530 and 1585 that indio slaves living in Castile brought to the Spanish courts to secure their freedom. Because plaintiffs had to prove their indio-ness in a Spanish imperial context, these lawsuits reveal the difficulties of determining who was an indio and who was not—especially since it was an all-encompassing construct connoting subservience and political personhood and at times could refer to people from Mexico, Peru, or South or East Asia. Van Deusen demonstrates that the categories of free and slave were often not easily defined, and she forces a rethinking of the meaning of indio in ways that emphasize the need to situate colonial Spanish American indigenous subjects in a global context.
AUTHOR BIOGRAPHY
Nancy E. van Deusen is Professor of History at Queen's University in Kingston, Ontario. She is the author of Between the Sacred and the Worldly: The Institutional and Cultural Practice of Recogimiento in Colonial Lima and The Souls of Purgatory: The Spiritual Diary of a Seventeenth-Century Afro-Peruvian Mystic, Ursula de Jesús.
REVIEWS
"Weaving names and fragments of lives into a richly textured narrative, Van Deusen does justice to their stories, placing the reader in the heart of the empire, facing its darkest moment."

"Van Deusen concentrates her attention on the microcosm of a village society in the area of Seville and on the part played in it by indios imported from America, but she also gives consideration to the indio menials of the New World and to the Asian context from which some slaves were drawn. The evidence throws light mainly on the southern part of Castile, but the book’s perspective is global, sophisticated, admirable, and pathbreaking."

"Nancy van Deusen has written a masterpiece of early modern ethnohistory that brings to light a veritable diaspora of indigenous slaves in Spain, while expanding the meaning of indio as a global and changing identifier constructed outside the colonial confines of America."

"I consider van Deusen’s work to be highly relevant for legal historians interested in interdisciplinary approaches, for example, by taking a bottom-up perspective, or for cultural and social historians who are interested in understanding past legal orders. Needless to say, her work makes a substantial contribution to the historiography about the Spanish and Portuguese empires in a global perspective, and about the indigenous people placed under its authority."

[T]hese chapters paint an elegant canvas, carefully foregrounding the meticulousness of [van Deusen's] records against a well-rendered background of imperial structure and ideology."

"This meticulously researched and thoughtfully argued volume provides an accomplished historian’s analysis of the implications of enslaved American indigenous peoples, or indios, efforts in Spain to obtain or regain their freedom through the judicial system. . . . Solidly based on archival research and a rich secondary literature, this book offers a fascinating perspective on the Spanish monarchy’s evolving policy toward its indios in the 16th century, as well as the varied understanding of what indio meant in an interconnected globe. Essential. Most college and university libraries."

"Global Indios will prompt historians and scholars in other fields to rethink crucial themes around the beginnings of Spanish colonialism and beyond in a new light: the meaning of indio, the complex form in which many social relations were created and cemented, the shaping of ideas about race, the idea of justice as a universal value, and how pertinent it is to think of the concept of global history at this early stage. This book is indeed a major contribution to the historiography on colonialism."

"[V]an Deusen’s book is especially timely. As we struggle through a period of heightened scrutiny on migration and personhood, it is helpful to look back on similar episodes from the past to see how we might act differently. Van Deusen’s work, then, not only provides fascinating insights into a turbulent and formative period in Western history, but provides a lens through which we can critically consider our current situation as well."

"Global Indios is an erudite and well-researched book that offers a great contribution to the study of indigenous slavery in early modern Spain, the Spanish legal system, and the development of imperial identities."

“An historian’s historian, van Deusen makes broad connections and speaks to a range of historiographical questions, making Global Indios a must read for anyone interested in the Early Modern World.”

“Van Deusen’s book is a stellar and stimulating piece of important world-historical research. . . . This book is an essential point of reference for all serious investigations into the importance of ‘Indianness’ as an early modern construct with world-historical consequences.”

2. Crossing the Atlantic and Entering Households 64