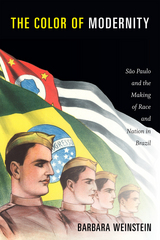 In The Color of Modernity, Barbara Weinstein focuses on race, gender, and regionalism in the formation of national identities in Brazil; this focus allows her to explore how uneven patterns of economic development are consolidated and understood. Organized around two principal episodes—the 1932 Constitutionalist Revolution and 1954’s IV Centenário, the quadricentennial of São Paulo’s founding—this book shows how both elites and popular sectors in São Paulo embraced a regional identity that emphasized their European origins and aptitude for modernity and progress, attributes that became—and remain—associated with “whiteness.” This racialized regionalism naturalized and reproduced regional inequalities, as São Paulo became synonymous with prosperity while Brazil’s Northeast, a region plagued by drought and poverty, came to represent backwardness and São Paulo’s racial “Other.”  This view of regional difference, Weinstein argues, led to development policies that exacerbated these inequalities and impeded democratization.
AUTHOR BIOGRAPHY
Barbara Weinstein is the Silver Professor of History at New York University. She is the coeditor of The Making of the Middle Class: Toward a Transnational History, also published by Duke University Press, and the author of For Social Peace in Brazil: Industrialists and the Remaking of the Working Class in São Paulo, 1920-1964.
REVIEWS
"The Color of Modernity shows how a regional approach can advance the study of race relations in Brazil and demonstrates the intricate interplay among race, class, and gender. Moreover, it expertly reveals the complex relations between regional and national identity."

"Weinstein’s sophisticated analysis shows how Brazil’s most economically powerful state fashioned a regional identity built on whiteness, modernity, and economic success in a nation that has privileged a discourse of racial harmony and mixture."

"The Color of Modernity provides us with a finegrained representation of history that teaches us about the particularities of regionalism, nationalism, but also modernity, meanings of race and democracy in Brazil.... I recommend this book to any (informed) reader, who is not only interested in the particularities of 20 century Brazil, but who also wants to understand how history and histories are done through the continuity of time."

"Weinstein’s book is a finely researched work on early twentieth century Brazil that will interest not only scholars of São Paulo or Brazilian history, but also students of regionalism, race and gender relations, and media and public events."

"... Barbara Weinstein, one of the world’s leading historians of Brazil, offers scholars of the humanities and social sciences a new take on the cultural history of race and nation and of social inequality. This book immerses the reader in the historiography produced in the U.S. of mid-twentieth-century Brazil, of race, and of cultural politics and geography. Weinstein has, moreover, utterly mastered the vast, rich body of scholarship on these subjects produced in Brazil, bringing it comprehensively and lucidly to an Anglophone audience."

"The value of Weinstein’s book lies in the highly original framing of her analysis and laser-like focus of her two-event analysis. Superbly crafted and meticulously researched. Highly recommended."

"The Color of Modernity offers a meticulously researched, beautifully written story of simultaneity, intersectionality and mutual constitution. Elaborating, and speaking from, the nexus of a sophisticated set of theoretical and methodological approaches, Barbara Weinstein draws masterfully on her years of scholarly experience. . . . The result is a triumph not only for Weinstein, but also for the recent decades of historiographical, methodological and theoretical innovation that inform her work."

"[T]his is a richly documented and provocatively argued work that provides scholars with a detailed understanding of the twentieth-century construction of São Paulo (and Brazilian) identity, while adding nuance to the role of the 1932 uprising in regional and national history. Weinstein also brings a solid and fresh contribution to our under-standing of the intersection of race and modernity in Paulista and Brazilian identity. . . . Though Weinstein’s work speaks to a particular set of circumstances in Brazil, the author’s discussion of regionalism in the introductory chapter will be of interest to scholars of regional and national identity more broadly writ. . . . Weinstein’s examination of the intersection between discriminatory policy and regional chauvinism is one of her most important contributions to scholarship, both within the field of Latin American history and beyond."

"Barbara Weinstein’s scintillating The Color of Modernity marks a turning point in scholarly conversations about race and nation in Latin America, pushing this already dynamic field onto exciting new terrain. . . . Weinstein’s lively conversational tone, her lucid engagement of counter-arguments, her illuminating use of and contributions to theoretical debates, and the sheer scope and depth of her research ensure that this book will appeal not just to students and scholars of race in the Americas, but to those engaged in conversations about region, nation, social inequality, race, and whiteness in other parts of the world.

"[A] major and groundbreaking contribution to the scholarship on race, region/nation, and notions of modernity in Brazil. The Color of Modernity is that rare book that prompts historians to reconsider many things they thought they understood about Brazil, even as it offers innovative approaches to the consideration of region for scholars of Latin America and beyond."

"The Color of Modernity is undoubtedly a new tome in Brazilian history, essential for scholars of race, and regional and national identity in Latin America."

"What is fascinating about this book is that it makes an important attempt to link cultural narratives with political economy, something that has been badly neglected in the study of Latin America.... Weinstein’s book makes for highly recommended reading."

“A rich and sweeping narrative. A prescient analysis.”

"Situated at the intersection of social, cultural, and intellectual history, The Color of Modernity overturns the dualist logic of various theories of modernization. . . . Barbara Weinstein’s brilliant book offers an excellent reminder to historians that national and global history are only possible when they take seriously the intricate processes of the social and cultural construction of the place we call 'region'."

Part I: The War of São Paulo

5. Provincializing São Paulo: The "Other" Regions Strike Back  192