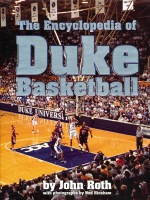 Duke basketball is one of the most celebrated programs in intercollegiate athletics. With fourteen Final Four appearances and three national championships for the men’s teams and four Final Four appearances and five ACC championships for the women’s teams, the Blue Devils have established a worldwide reputation for excellence and have inspired the fierce devotion of generations of fans.

The Encyclopedia of Duke Basketball is the ultimate reference source for true-blue fans, with profiles of great games, classic finishes (both wins and losses), and compelling personalities, including players, coaches, and opponents. While it is filled with a wealth of statistical information, the Encyclopedia goes well beyond the numerical record to deliver insights on people and performances and anecdotes that will surprise even the most seasoned Duke supporter.

The Encyclopedia features:
— A timeline of key events in men’s and women’s basketball history.
— Capsules of the most important men’s and women’s games in the program’s history, including the men’s buzzer-beating overtime win against Kentucky in 1992 and the women’s stunning victory over Tennessee to reach the Final Four in 1999.
— An alphabetical encyclopedia with entries on players from Alaa Abdelnaby to Bill Zimmer and on coaches, customs, opponents, venues, and records.
— Exclusive interviews in which standout players, including Danny Ferry, Mike Gminski, Grant Hill, Christian Laettner, and Jason Williams, recount moments they’ll never forget.
— A statistical record book covering every season through 2005–06.
—130 photographs of Duke basketball history.

A source of entertainment as well as information, this volume will be a great resource for fans hoping to settle arguments, relive favorite games, or simply enjoy hours of pleasurable reading.

John Roth (Duke ‘80) is vice-president of Moore Productions, editor of the Blue Devil Weekly, and an announcer for the Duke Radio Network. A former editor of Basketball America magazine, he was Sports Information Director at Duke from 1986 to 1990.

REVIEWS
“The Encyclopedia of Duke Basketball is a balanced, comprehensive, and well-researched look a the first century of Duke University basketball.”

“Every Duke fan who still gets chills from remembering Bobby Hurley’s 3-pointer against UNLV in the ‘91 semis will want a copy of John Roth’s The Encyclopedia of Duke Basketball.”

“[M]ore than a coffee table book. It’s a reference book or historical media guide to the fourth power on college hoops in this region.”

“The ultimate reference on all things Duke basketball.”