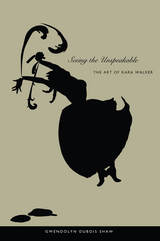 One of the youngest recipients of a MacArthur “genius” grant, Kara Walker, an African American artist, is best known for her iconic, often life-size, black-and-white silhouetted figures, arranged in unsettling scenes on gallery walls. These visually arresting narratives draw viewers into a dialogue about the dynamics of race, sexuality, and violence in both the antebellum South and contemporary culture. Walker’s work has been featured in exhibits around the world and in American museums including the Museum of Modern Art, the Guggenheim, and the Whitney. At the same time, her ideologically provocative images have drawn vociferous criticism from several senior African American artists, and a number of her pieces have been pulled from exhibits amid protests against their disturbing representations. Seeing the Unspeakable provides a sustained consideration of the controversial art of Kara Walker.

Examining Walker’s striking silhouettes, evocative gouache drawings, and dynamic prints, Gwendolyn DuBois Shaw analyzes the inspiration for and reception of four of Walker’s pieces: The End of Uncle Tom and the Grand Allegorical Tableau of Eva in Heaven, John Brown, A Means to an End, and Cut. She offers an overview of Walker’s life and career, and contextualizes her art within the history of African American visual culture and in relation to the work of contemporary artists including Faith Ringgold, Carrie Mae Weems, and Michael Ray Charles. Shaw describes how Walker deliberately challenges viewers’ sensibilities with radically de-sentimentalized images of slavery and racial stereotypes. This book reveals a powerful artist who is questioning, rather than accepting, the ideas and strategies of social responsibility that her parents’ generation fought to establish during the civil rights era. By exploiting the racist icons of the past, Walker forces viewers to see the unspeakable aspects of America’s racist past and conflicted present.

Gwendolyn DuBois Shaw is Assistant Professor of History of Art and Architecture and of African and African American Studies at Harvard University. Her website provides more information about the author.

REVIEWS
“Seeing the Unspeakable is an extremely important work. Gwendolyn DuBois Shaw is the first writer to place this controversial young artist’s work firmly in an art historical perspective. She combines careful scrutiny of the art’s formal traits with wide-ranging iconographic analysis, canny theoretical interpretation, and a revelatory examination of the work’s critical reception. The result is an extraordinary piece of scholarship.”—Judith Wilson, University of California, Irvine


“It is not easy to write a scholarly work on a living artist whose talent for generating controversy at times obscures her formidable creative talent. However, Gwendolyn DuBois Shaw has done it, with remarkable intelligence and style. She brilliantly contextualizes Kara Walker’s work in terms of art history and African American history in a book that will be of tremendous value to scholars across many disciplines.”—Henry Louis Gates Jr., Harvard University