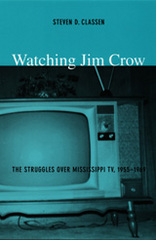 In the early 1960s, whenever the Today Show discussed integration, wlbt-tv, the nbc affiliate in Jackson, Mississippi, cut away to local news after announcing that the Today Show content was “network news . . . represent[ing] the views of the northern press.” This was only one part of a larger effort by wlbt and other local stations to keep African Americans and integrationists off Jackson’s television screens. Watching Jim Crow presents the vivid story of the successful struggles of African Americans to achieve representation in the tv programming of Jackson, a city many considered one of the strongest bastions of Jim Crow segregation. Steven D. Classen provides a detailed social history of media activism and communications policy during the civil rights era. He focuses on the years between 1955—when Medgar Evers and the naacp began urging the two local stations, wlbt and wjtv, to stop censoring African Americans and discussions of integration—and 1969, when the U.S. Court of Appeals issued a landmark decision denying wlbt renewal of its operating license.

During the 1990s, Classen conducted extensive interviews with more than two dozen African Americans living in Jackson, several of whom, decades earlier, had fought to integrate television programming. He draws on these interviews not only to illuminate their perceptions—of the civil rights movement, what they accomplished, and the present as compared with the past—but also to reveal the inadequate representation of their viewpoints in the legal proceedings surrounding wlbt’s licensing. The story told in Watching Jim Crow has significant implications today, not least because the Telecommunications Act of 1996 effectively undid many of the hard-won reforms achieved by activists—including those whose stories Classen relates here.

REVIEWS
“Watching Jim Crow is a highly original, sophisticated, and important piece of scholarship that will undoubtedly influence a variety of fields ranging from legal theory to cultural studies. One of the most striking things about this work is the compelling way it crosses barriers that have blinkered both scholarly and commonsense thinking about law, media, and culture.”—Thomas Streeter, author of Selling the Air: A Critique of the Policy of Commercial Broadcasting in the United States


“Watching Jim Crow is a powerful blend of memory, history, and careful analysis. For those who lived through the days and years chronicled here, especially those of us who lived in the places Steven D. Classen studies, the memories are painful, the history is precise, the analysis essential. Classen’s strong recognition that television is something people do is a challenge not only for scholars, but for policymakers and citizens who recognize how much remains to be done.”—Horace Newcomb, director of the George Foster Peabody Awards at the University of Georgia

3: Trouble around the Ponderosa 75

5: Blacking out: Remembering TV and the Sixties
140