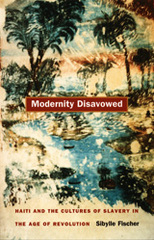 Modernity Disavowed is a pathbreaking study of the cultural, political, and philosophical significance of the Haitian Revolution (1791–1804). Revealing how the radical antislavery politics of this seminal event have been suppressed and ignored in historical and cultural records over the past two hundred years, Sibylle Fischer contends that revolutionary antislavery and its subsequent disavowal are central to the formation and understanding of Western modernity. She develops a powerful argument that the denial of revolutionary antislavery eventually became a crucial ingredient in a range of hegemonic thought, including Creole nationalism in the Caribbean and G. W. F. Hegel’s master-slave dialectic.

Fischer draws on history, literary scholarship, political theory, philosophy, and psychoanalytic theory to examine a range of material, including Haitian political and legal documents and nineteenth-century Cuban and Dominican literature and art. She demonstrates that at a time when racial taxonomies were beginning to mutate into scientific racism and racist biology, the Haitian revolutionaries recognized the question of race as political. Yet, as the cultural records of neighboring Cuba and the Dominican Republic show, the story of the Haitian Revolution has been told as one outside politics and beyond human language, as a tale of barbarism and unspeakable violence. From the time of the revolution onward, the story has been confined to the margins of history: to rumors, oral histories, and confidential letters. Fischer maintains that without accounting for revolutionary antislavery and its subsequent disavowal, Western modernity—including its hierarchy of values, depoliticization of social goals having to do with racial differences, and privileging of claims of national sovereignty—cannot be fully understood.

Sibylle Fischer is Associate Professor of Literature and Romance Studies at Duke University.

REVIEWS
“Modernity Disavowed is a superior work. It is not only important but also needed.”—Alicia Ríos, coeditor of The Latin American Cultural Studies Reader


“Modernity Disavowed is a tour de force. This magnificent work is the best book on its subject and at the forefront of a new wave of scholarship that is already transforming both the study of the Caribbean and the study of modernity. I fully expect it to become a classic in its field.”—Lewis R. Gordon, author of Existentia Africana: Understanding Africana Existential Thought

1. The Deadly Hermenuetics of the Trial of Jose Antonio Aponte 41

3. Beyon National Culture, the Abject: The Case of Placido 77

4. Cuban Antislavery Narratives and the Origins of Literary Discourse 107

6. Guilt and Betrayal in Santo Domingo 155

9. Literature and the Theater of Revolution 201

Appendix A. Imperial Constitution of Haiti 275