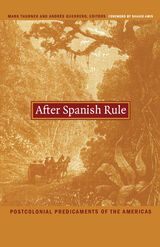 Insisting on the critical value of Latin American histories for recasting theories of postcolonialism, After Spanish Rule is the first collection of essays by Latin Americanist historians and anthropologists to engage postcolonial debates from the perspective of the Americas. These essays extend and revise the insights of postcolonial studies in diverse Latin American contexts, ranging from the narratives of eighteenth-century travelers and clerics in the region to the status of indigenous intellectuals in present-day Colombia. The editors argue that the construction of an array of singular histories at the intersection of particular colonialisms and nationalisms must become the critical project of postcolonial history-writing.

Challenging the universalizing tendencies of postcolonial theory as it has developed in the Anglophone academy, the contributors are attentive to the crucial ways in which the histories of Latin American countries—with their creole elites, hybrid middle classes, subordinated ethnic groups, and complicated historical relationships with Spain and the United States—differ from those of other former colonies in the southern hemisphere. Yet, while acknowledging such differences, the volume suggests a host of provocative, critical connections to colonial and postcolonial histories around the world.

Mark Thurner is Associate Professor of History and Anthropology at the University of Florida. He is the author of From Two Republics to One Divided: Contradictions of Postcolonial Nationmaking in Andean Peru, also published by Duke University Press.

Andrés Guerrero is affiliated with La Facultad Latinoamericana de Ciencias Sociales (FLACSO), a research institute with branches in all Latin American countries. He is the author of numerous books in Spanish.

After Spanish Rule: Writing Another After / Mark Thurner 12

Mothers and Mistresses of the Urban Bolivia Public Sphere: Postcolonial Predicament and National Imaginary in Oruro's Carnival / Thomas A. Abercrombie 176

The Administration of Dominated Populations under a Regime of Customary Citizenship: The Case of Postcolonial Ecuador / Andrés Guerrero 272