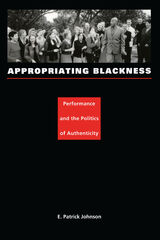 Performance artist and scholar E. Patrick Johnson’s provocative study examines how blackness is appropriated and performed—toward widely divergent ends—both within and outside African American culture. Appropriating Blackness develops from the contention that blackness in the United States is necessarily a politicized identity—avowed and disavowed, attractive and repellent, fixed and malleable. Drawing on performance theory, queer studies, literary analysis, film criticism, and ethnographic fieldwork, Johnson describes how diverse constituencies persistently try to prescribe the boundaries of "authentic" blackness and how performance highlights the futility of such enterprises.

Johnson looks at various sites of performed blackness, including Marlon Riggs’s influential documentary Black Is . . . Black Ain’t and comedic routines by Eddie Murphy, David Alan Grier, and Damon Wayans. He analyzes nationalist writings by Amiri Baraka and Eldridge Cleaver, the vernacular of black gay culture, an oral history of his grandmother’s experience as a domestic worker in the South, gospel music as performed by a white Australian choir, and pedagogy in a performance studies classroom. By exploring the divergent aims and effects of these performances—ranging from resisting racism, sexism, and homophobia to excluding sexual dissidents from the black community—Johnson deftly analyzes the multiple significations of blackness and their myriad political implications. His reflexive account considers his own complicity, as ethnographer and teacher, in authenticating narratives of blackness.

E. Patrick Johnson is a performance artist and Assistant Professor of Performance Studies at Northwestern University.

REVIEWS
"With Appropriating Blackness, E. Patrick Johnson has given us a book worthy of the breadth its title signals. It is written in an excellent and refreshingly clear prose style which sacrifices nothing in the way of complexity of the ideas being presented. Johnson makes his observations about the relatedness of performance and blackness more compelling with each successive case study."—Dwight A. McBride, coeditor of Black Like Us: A Century of Lesbian, Gay, and Bisexual African American Fiction


"Appropriating Blackness is a wonderful study that makes important and timely contributions across many fields. E. Patrick Johnson is a skilled reader of texts and offers useful introductions to complex theories of race, sexuality, and culture.”—David Román, author of Acts of Intervention: Performance, Gay Culture, and AIDS

"Blackness" and Authenticity: What's Performance Got to Do with It? 1

4. "Nevah Had uh Cross Word": Mammy and the Trope of Black Womanhood 104

5. Sounds of Blackness Down Under: The Cafe of the Gate of Salvation 160

Appendix B Interview with Mrs. Smith 311