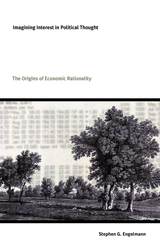 Imagining Interest in Political Thought argues that monistic interest—or the shaping and coordination of different pursuits through imagined economies of self and public interest—constitutes the end and means of contemporary liberal government. The paradigmatic theorist of monistic interest is the English political philosopher Jeremy Bentham (1748–1832), whose concept of utilitarianism calls for maximization of pleasure by both individuals and the state. Stephen G. Engelmann contends that commentators have too quickly dismissed Bentham’s philosophy as a crude materialism with antiliberal tendencies. He places Benthamite utilitarianism at the center of his account and, in so doing, reclaims Bentham for liberal political theory.

Tracing the development of monistic interest from its origins in Reformation political theory and theology through late-twentieth-century neoliberalism, Engelmann reconceptualizes the history of liberalism as consisting of phases in the history of monistic interest or economic government. He describes how monistic interest, as formulated by Bentham, is made up of the individual’s imagined expectations, which are constructed by the very regime that maximizes them. He asserts that this construction of interests is not the work of a self-serving manipulative state. Rather, the state, which is itself subject to strict economic regulation, is only one cluster of myriad "public" and "private" agencies that produce and coordinate expectations. In place of a liberal vision in which government appears only as a protector of the free pursuit of interest, Engelmann posits that the free pursuit of interest is itself a mode of government, one that deploys individual imagination and choice as its agents.

Stephen G. Engelmann is Assistant Professor of Political Science at the University of Illinois at Chicago.

REVIEWS
"Imagining Interest in Political Thought is an extremely impressive, powerful, and exciting work which casts important light on a crucial yet surprisingly neglected aspect of the history of political thought: the emergence of utilitarianism as a major political theory and its subversion of conceptions of natural law and civic humanism as the basis for social cooperation."—Philip Schofield, General Editor, The Collected Works of Jeremy Bentham