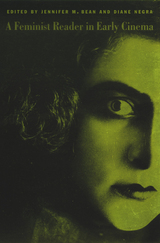 A Feminist Reader in Early Cinema marks a new era of feminist film scholarship. The twenty essays collected here demonstrate how feminist historiographies at once alter and enrich ongoing debates over visuality and identification, authorship, stardom, and nationalist ideologies in cinema and media studies. Drawing extensively on archival research, the collection yields startling accounts of women's multiple roles as early producers, directors, writers, stars, and viewers. It also engages urgent questions about cinema's capacity for presenting a stable visual field, often at the expense of racially, sexually, or class-marked bodies.

While fostering new ways of thinking about film history, A Feminist Reader in Early Cinema illuminates the many questions that the concept of "early cinema" itself raises about the relation of gender to modernism, representation, and technologies of the body. The contributors bring a number of disciplinary frameworks to bear, including not only film studies but also postcolonial studies, dance scholarship, literary analysis, philosophies of the body, and theories regarding modernism and postmodernism.

Reflecting the stimulating diversity of early cinematic styles, technologies, and narrative forms, essays address a range of topics—from the dangerous sexuality of the urban flâneuse to the childlike femininity exemplified by Mary Pickford, from the Shanghai film industry to Italian diva films—looking along the way at birth-control sensation films, French crime serials, "war actualities," and the stylistic influence of art deco. Recurring throughout the volume is the protean figure of the New Woman, alternately garbed as childish tomboy, athletic star, enigmatic vamp, languid diva, working girl, kinetic flapper, and primitive exotic.

Jennifer M. Bean is Assistant Professor of Comparative Literature and Cinema Studies at the University of Washington.

Diane Negra is Lecturer in Film and Television Studies at the University of East Anglia.

REVIEWS
”Despite the enormous amount of work that has been done in the last two decades on women and early cinema, this anthology is the first of its kind. It is outstanding.”—Judith Mayne, author of Framed: Lesbians, Feminists, and Media Culture


”This collection is a persuasive reminder that the hottest current topics in film theory—cultural intersections, questions of authorship, fantasy and technology, representation and the body—demand and are illuminated by feminist inquiry.”— Linda Mizejewski, author of Ziegfeld Girl: Image and Icon in Culture and Cinema

Circuits of Memory and History: The Memoirs of Alice Guy-Blache / Amelie Hastie 29

Making Ends Meet: "Welfare Films" and the Politics of Consumption during the Progressive Era / Constance Balides 166

The Queer Career of Jim Crow: Racial and Sexual Transformation in A Florida Enchantment / Siobhan B. Somerville 251

"So Real as to Seem Like Life Itself": The Photoplay Fiction of Adela Rogers St. Johns / Anne Morey 333

V. The Problem with Periodization

An Amorous History of the Silver Screen: The Actress as Vernacular Embodiment in Early Chinese Film Culture / Zhang Zhen 501