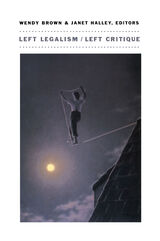 In recent decades, left political projects in the United States have taken a strong legalistic turn. From affirmative action to protection against sexual harassment, from indigenous peoples’ rights to gay marriage, the struggle to eliminate subordination or exclusion and to achieve substantive equality has been waged through courts and legislation. At the same time, critiques of legalism have generally come to be regarded by liberal and left reformers as politically irrelevant at best, politically disunifying and disorienting at worst. This conjunction of a turn toward left legalism with a turn away from critique has hardened an intellectually defensive, brittle, and unreflective left sensibility at a moment when precisely the opposite is needed. Certainly, the left can engage strategically with the law, but if it does not also track the effects of this engagement—effects that often exceed or even redound against its explicit aims—it will unwittingly foster political institutions and doctrines strikingly at odds with its own values.

Brown and Halley have assembled essays from diverse contributors—law professors, philosophers, political theorists, and literary critics—united chiefly by their willingness to think critically from the left about left legal projects. The essays themselves vary by topic, by theoretical approach, and by conclusion. While some contributors attempt to rework particular left legal projects, others insist upon abandoning or replacing those projects. Still others leave open the question of what is to be done as they devote their critical attention to understanding what we are doing. Above all, Left Legalism/Left Critique is a rare contemporary argument and model for the intellectually exhilarating and politically enriching dimensions of left critique—dimensions that persist even, and perhaps especially, when critique is unsure of the intellectual and political possibilities it may produce.

Wendy Brown is Professor of Political Science and Women’s Studies at the University of California, Berkeley. She is the author of States of Injury: Power and Freedom in Late Modernity.

Janet Halley is Professor of Law at Harvard Law School. She is the author of Don’t: A Reader’s Guide to the Military’s Anti-Gay Policy, published by Duke University Press.

REVIEWS
&ldquo;Is it possible to imagine a left legalism that is both politically efficacious and intellectually responsible in the face of the contemporary corruptions of neoliberal political order? In the essays collected here Brown and Halley have assembled a powerful response to hegemony of a liberalism that lacks conviction. They succeed in advancing both a critique of the limits of legalism and a space for thinking of legal struggle as a positive force for projects of liberation.&rdquo;&mdash;Thomas Dumm, Amherst College


“This collection organizes well-known theorists from many fields into an energizing project mapped by their coordinating passions and concerns. The essays in Left Legalism/Left Critique together form a new interdisciplinary field of left critique.”—Dana D. Nelson, author of National Manhood: Capitalist Citizenship and the Imagined Fraternity of White Men


The Critique of Rights in Critical Legal Studies / Duncan Kennedy

When Renewal Repeats: Thinking against the Box / David Kennedy