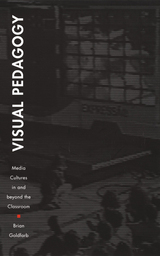 In classrooms, museums, health clinics and beyond, the educational uses of visual media have proliferated over the past fifty years. Film, video, television, and digital media have been integral to the development of new pedagogical theories and practices, globalization processes, and identity and community formation. Yet, Brian Goldfarb argues, the educational roles of visual technologies have not been fully understood or appreciated. He contends that in order to understand the intersections of new media and learning, we need to recognize the sweeping scope of the technologically infused visual pedagogy—both in and outside the classroom. From Samoa to the United States mainland to Africa and Brazil, from museums to city streets, Visual Pedagogy explores the educational applications of visual media in different institutional settings during the past half century.

Looking beyond the popular media texts and mainstream classroom technologies that are the objects of most analyses of media and education, Goldfarb encourages readers to see a range of media subcultures as pedagogical tools. The projects he analyzes include media produced by AIDS/HIV advocacy groups and social services agencies for classroom use in the 1990s; documentary and fictional cinemas of West Africa used by the French government and then by those resisting it; museum exhibitions; and TV Anhembi, a municipally sponsored collaboration between the television industry and community-based videographers in São Paolo, Brazil.

Combining media studies, pedagogical theory, and art history, and including an appendix of visual media resources and ideas about the most productive ways to utilize visual technologies for educational purposes, Visual Pedagogy will be useful to educators, administrators, and activists.

Brian Goldfarb is Assistant Professor of Communication at the University of California, San Diego. He was Curator of Education at the New Museum of Contemporary Art in New York City from 1993 to 1997.

REVIEWS
“The topic of this book, pedagogy in light of media technologies, is of utmost importance. Equally important is Brian Goldfarb's attention to the success (or lack thereof) of educators and cultural activists in using these technologies to elicit the active, critical engagement of the citizenry in the project of learning.”—Michael Renov, coeditor of Collecting Visible Evidence

Introduction: An Ethos of Visual Pedagogy


Part One. Historicizing New Technologies in the Classroom


3. Critical Pedagogy at the End of the Rainbow Curriculum: Media Activism in the Sphere of Sex Ed

4. Peer Education and Interactivity: Youth Cultures and New Media Technologies in Schools and Beyond

Appendix: An Annotated List of Media Organizations, Distributors, and Resources