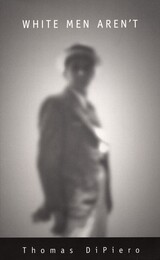 Psychoanalytic theory has traditionally taken sexual difference to be the fundamental organizing principle of human subjectivity. White Men Aren’t contests that assumption, arguing that other forms of difference—particularly race—are equally important to the formation of identity. Thomas DiPiero shows how whiteness and masculinity respond to various, complex cultural phenomena through a process akin to hysteria and how differences traditionally termed “racial” organize psychic, social, and political life as thoroughly as sexual difference does. White masculinity is fraught with anxiety, according to DiPiero, because it hinges on the unstable construction of white men’s cultural hegemony. White men must always struggle against the loss of position and the fear of insufficiency—against the specter of what they are not.

Drawing on the writings of Freud, Lacan, Butler, Foucault, and Kaja Silverman, as well as on biology, anthropology, and legal sources, Thomas DiPiero contends that psychoanalytic theory has not only failed to account for the role of race in structuring identity, it has in many ways deliberately ignored it. Reading a wide variety of texts—from classical works such as Oedipus Rex and The Iliad to contemporary films including Boyz 'n' the Hood and Grand Canyon—DiPiero reveals how the anxiety of white masculine identity pervades a surprising range of Western thought, including such ostensibly race-neutral phenomena as Englightenment forms of reason.

Thomas DiPiero is Chair of the Department of Modern Languages and Cultures and Associate Professor of both French and Visual and Cultural Studies at the University of Rochester. He is the author of Dangerous Truths and Criminal Passions: The Evolution of the French Novel, 1569–1791 and coeditor of Illicit Sex: Identity Politics in Early Modern Europe.

REVIEWS
&ldquo;This is an incredibly smart book, one that does an excellent job of joining its psychoanalytical with its historical and political arguments and offers surprising, provocative, and convincing conclusions.&rdquo;&mdash;Sally Robinson, Texas A &amp; M University


“White Men Aren't is a lively and original analysis of the crisis besetting white male identity. It encourages the reader to think outside the box and to consider the premises of naturalized categories of thought. DiPiero has made a significant contribution to the fields of gender and race studies.”—Kalpana Seshadri-Crooks, Boston College

3. The Fair Sex: It’s Not What You Think

4. In Defense of the Phallus