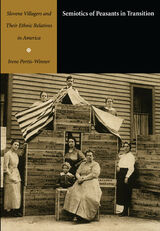 In Semiotics of Peasants in Transition Irene Portis-Winner examines the complexities of ethnic identity in a traditional Slovene village with unique ties to an American city. At once an investigation into a particular anthropological situation and a theoretical exploration of the semiotics of ethnic culture—in this case a culture permeated by transnational influences—Semiotics of Peasants in Transition describes the complex relationships that have existed between and among the villagers remaining in Slovenia and those who, throughout the nineteenth and twentieth centuries, emigrated to Cleveland, Ohio.
Describing a process of continuous and enduring interaction between these geographically separate communities, Portis-Winner explains how, for instance, financial assistance from the emigrants enabled their Slovenian hometown to survive the economic depressions of the 1890s and 1930s. She also analyzes the extent to which memories, rituals, myths, and traditional activities from Slovenia have sustained their Cleveland relatives. The result is a unique anthropological investigation into the signifying practices of a strongly cohesive—yet geographically split—ethnic group, as well as an illuminating application of semiotic analyses to communities and the complex problems they face.
AUTHOR BIOGRAPHY

Irene Portis-Winner is a Visiting Scholar (2002–2003) at the Philosophy of Education Research Center, Harvard University.

REVIEWS
“This is an important ethnography, very different from the usual run-of-the-mill village ethnographies of ex-Yugoslavia, and the methodology followed is a useful and potentially important addition to the literature on transnationalism.”—Michael Herzfeld, author of Cultural Intimacy: Social Poetics in the Nation-State

I. The Dynamics of a Dialogic Relation between a Peasant Village and Its Ethnic Counterpart: A Semiotic Approach


Prologue: “The Strange Intruder” (from Peirce): A Peasant Village and Its Many Others

1. A Glance at the Village and Its Sister Ethnic Communities in Cleveland and Hibbing

II. Theoretical Issues and Terminology: From the Outer to the Inner Point of View


III. The Village and the Slovene Communities in Cleveland and Hibbing: A Historical Perspective

5. Zerovnica: Its Past and the Question of the Future

6. The Story of the Ethnic Community in Cleveland