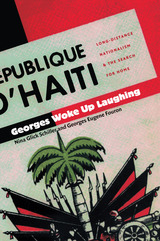 Combining history, autobiography, and ethnography, Georges Woke Up Laughing provides a portrait of the Haitian experience of migration to the United States that illuminates the phenomenon of long-distance nationalism, the voicelessness of certain citizens, and the impotency of government in an increasingly globalized world. By presenting lively ruminations on his life as a Haitian immigrant, Georges Eugene Fouron—along with Nina Glick Schiller, whose own family history stems from Poland and Russia—captures the daily struggles for survival that bind together those who emigrate and those who stay behind.
According to a long-standing myth, once emigrants leave their homelands—particularly if they emigrate to the United States—they sever old nationalistic ties, assimilate, and happily live the American dream. In fact, many migrants remain intimately and integrally tied to their ancestral homeland, sometimes even after they become legal citizens of another country. In Georges Woke Up Laughing the authors reveal the realities and dilemmas that underlie the efforts of long-distance nationalists to redefine citizenship, race, nationality, and political loyalty. Through discussions of the history and economics that link the United States with countries around the world, Glick Schiller and Fouron highlight the forces that shape emigrants’ experiences of government and citizenship and create a transborder citizenry. Arguing that governments of many countries today have almost no power to implement policies that will assist their citizens, the authors provide insights into the ongoing sociological, anthropological, and political effects of globalization.
Georges Woke up Laughing will entertain and inform those who are concerned about the rights of people and the power of their governments within the globalizing economy.

“In my dream I was young and in Haiti with my friends, laughing, joking, and having a wonderful time. I was walking down the main street of my hometown of Aux Cayes. The sun was shining, the streets were clean, and the port was bustling with ships. At first I was laughing because of the feeling of happiness that stayed with me, even after I woke up. I tried to explain my wonderful dream to my wife, Rolande. Then I laughed again but this time not from joy. I had been dreaming of a Haiti that never was.”—from Georges Woke Up Laughing

Nina Glick Schiller is Associate Professor of Anthropology at the University of New Hampshire.

Georges Eugene Fouron is Associate Professor of Education at the State University of New York at Stony Brook.

REVIEWS
“Nina Glick Schiller and Georges Eugene Fouron do a masterful job of describing the full spectrum of factors shaping the experience of migration, ranging from utopian dreams of the home country to the hard reality that some states are only apparent states. This is a work of inspired ethnographic research, stunning scholarship, and creative grace and energy.”—Karen McCarthy Brown, author of Mama Lola: A Vodou Priestess in Brooklyn

3. Delivering the Commission: The Return of the Native 36

4. “Without Them, I Would Not Be Here”: Transnational Kinship 58

5. “The Blood Remains Haitian”: Race, Nation, and Belonging in the Transmigrant Experience 92

6. “She Tried to Reclaim Me”: Gendered Long-Distance Nationalism 130

7. The Generation of Identity: The Long-Distance Nationalism of the Second Generation 155

8. “The Responsible State”: Dialogues of a Transborder Citizenry 178

9. The Apparent State: Sovereignty and the State of U.S.-Haitian Relations 208

10. Long-Distance Nationalism as a Debate: Shared Symbols and Disparate Messages 238

11. The Other Side of the Two-Way Street: Long-Distance Nationalism as a Subaltern Agenda 258