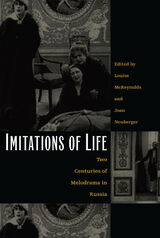 Imitations of Life views Russian melodrama from the eighteenth century to today as an unexpectedly hospitable forum for considering social issues. The contributors follow the evolution of the genre through a variety of cultural practices and changing political scenarios. They argue that Russian audiences have found a particular type of comfort in this mode of entertainment that invites them to respond emotionally rather than politically to social turmoil.
Drawing on a wide variety of sources, including plays, lachrymose novels, popular movies, and even highly publicized funerals and political trials, the essays in Imitations of Life argue that melodrama has consistently offered models of behavior for times of transition, and that contemporary televised versions of melodrama continue to help Russians cope with national events that they understand implicitly but are not yet able to articulate. In contrast to previous studies, this collection argues for a reading that takes into account the subtle but pointed challenges to national politics and to gender and class hierarchies made in melodramatic works from both the nineteenth and twentieth centuries. Collectively, the contributors shift and cross borders, illustrating how the cultural dismissal of melodrama as fundamentally escapist and targeted primarily at the politically disenfranchised has subverted the drama’s own intrinsically subversive virtues.
Imitations of Life will interest students and scholars of contemporary Russia, and Russian history, literature, and theater.

Louise McReynolds is Professor of History at the University of Hawai’i.

Joan Neuberger is Associate Professor of History at the University of Texas.

REVIEWS
&ldquo;Melodrama bore all the defects and virtues of its parent, the French Revolution. Given to wild flights, neck-breaking twists and turns, stark judgements of good and evil, the genre also brought public attention onto private life and the vicissitudes of underprivilege. Melodrama taught much to the Russians who appropriated it. As the contributors to the present volume demonstrate, it taught them how to see, to understand and even how to accomplish history. An imitator surely, but also a creator of life&mdash;we can all be grateful to Neuberger and McReynolds for bringing this to our attention.&rdquo;&mdash;James von Geldern, Macalaster College

The Misanthrope, the Orphan, and the Magpie: Imported Melodrama in the Twilight of Serfdom / Richard Stites

Melodramatizing Russia: Nineteenth-Century Views from the West / Julie A. Buckler

The Importance of Being Unhappy, or, Why She Died / Beth Holmgren

Home Was Never Where the Heart Was: Domestic Dystopias in Russia’s Silent Movie Melodramas / Louise McReynolds

Alcohol is Our Enemy! Soviet Temperance Melodramas of the 1920s / Julie A. Cassiday

Melodrama and the Myth of the Soviet Union / Lars T. Lih

Soviet Family Melodrama of the 1940s and 1950s: From Wait for Me to The Cranes Are Flying / Alexander Prokhorov

Between Public and Private: Revolution and Melodrama in Nikita Mikhalkov’s Slave of Love / Joan Neuberger