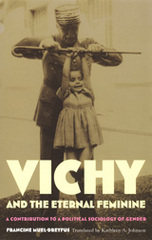 In this nuanced history of occupied France, Francine Muel-Dreyfus presents a powerful examination of the political and social construction of gender under the Vichy regime. Arguing that the regime used symbolic violence to reshape a liberal culture once based on individual rights into one of deference to hierarchical authority, Muel-Dreyfus shows how Vichy invoked theories of “natural” gender inequality and “eternal” opposition between the masculine and the feminine to justify women’s legal and social subordination, and how these ideologies were incorporated into the French woman’s sense of self.
Drawing on an extensive body of legislative, religious, educational, medical, and literary texts, Muel-Dreyfus examines how the Vichy regime brutally resurrected the gender politics that had been rejected during France’s social struggles in the 1930s. Strikingly, she reveals how this resurrection in turn fed into racial politics: childless women, for instance, and those who had abortions were construed—like Jews—as threats to France’s racial “purity.” With its atendant patterns of social inclusion and exclusion that were deeply rooted in the political and cultural history of the Third Republic, Muel-Dreyfus claims, a pervasive range of gendered metaphors helped to structure the very laws and policies of the Vichy regime.
The French language edition of this book was published in 1996 to wide acclaim. Contributing to theories about the role of gender in political philosophy, to the cultural anthropology of symbolic representation, and to our understanding of the history of fascism, Vichy and the Eternal Feminine will appeal to French, European, and twentieth-century historians; students and scholars of gender and racial studies; political scientists; and anthropologists.

Francine Muel-Dreyfus is Director of Studies at the Centre for European Sociology, School for the Study of Social Sciences (EHESS) in Paris.
Kathleen A. Johnson is a professional translator who holds a Ph.D in French literature from the University of California, Irvine.

REVIEWS
“This is an outstanding book—historical sociology and social history at its most original. Richly documented and drawing on a wide range of materials to produce the most incisive reading I’ve seen of this moment in French history, Vichy and the Eternal Feminine is a model for historical studies of the formation and construction of social and political identity.”—Joan Scott, author of Only Paradoxes to Offer: French Feminists and the Rights of Man

Part 1: The Hypnotic Power of Punishment

1. Writers of the Defeat in Search of Eternity

2. The Church and Feminine Contrition

Part 2: The Culture of Sacrifice