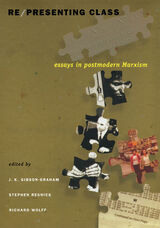 Re/presenting Class is a collection of essays that develops a poststructuralist Marxian conception of class in order to theorize the complex contemporary economic terrain. Both building upon and reconsidering a tradition that Stephen Resnick and Richard Wolff—two of this volume’s editors—began in the late 1980s with their groundbreaking work Knowledge and Class, contributors aim to correct previous research that has largely failed to place class as a central theme in economic analysis. Suggesting the possibility of a new politics of the economy, the collection as a whole focuses on the diversity and contingency of economic relations and processes.
Investigating a wide range of cases, the essays illuminate, for instance, the organizational and cultural means by which unmeasured surpluses—labor that occurs outside the formal workplace‚ such as domestic work—are distributed and put to use. Editors Resnick and Wolff, along with J. K. Gibson-Graham, bring theoretical essays together with those that apply their vision to topics ranging from the Iranian Revolution to sharecropping in the Mississippi Delta to the struggle over the ownership of teaching materials at a liberal arts college. Rather than understanding class as an element of an overarching capitalist social structure, the contributors—from radical and cultural economists to social scientists—define class in terms of diverse and ongoing processes of producing, appropriating, and distributing surplus labor and view class identities as multiple, changing, and interacting with other aspects of identity in contingent and unpredictable ways.
Re/presenting Class will appeal primarily to scholars of Marxism and political economy.

J. K. Gibson-Graham is the pen name of Julie Graham and Katherine Gibson. Graham is Professor of Geography at the University of Massachusetts, Amherst. Gibson is Senior Fellow of Human Geography at Australian National University.

Stephen A. Resnick is Professor of Economics at the University of Massachusetts, Amherst.

Richard D. Wolff Professor of Economics at the University of Massachusetts, Amherst.

REVIEWS
“ There’s a lot of talk about ‘getting back to class,’ as if all the other things that have concerned social theorists for the last couple of decades were a waste of time. Here’s a book that gets back to class a lot wiser for that experience. Even when you don’t agree with the contributors, they make you think, and very productively. What more can you ask from a book?”—Doug Henwood, author of A New Economy

3. Toward a New Class Politics of the Enterprise / J. K. Gibson-Graham and Phillip O’Neill

6. The Promise of Finance: Banks and Community Development / Carole Biewener

9. A Class Analysis of the Iranian Revolution of 1979 / Satyananda Gabriel