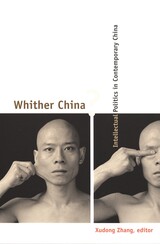 Whither China? presents an in-depth and wide-angled picture of Chinese intellectual life during the last decade of the millennium, as China struggled to move beyond the shadow of the Tiananmen tragedy. Because many cultural and intellectual paradigms of the previous decade were left in ruins by that event, Chinese intellectuals were forced in the early 1990s to search for new analytical and critical frameworks. Soon, however, they found themselves engulfed by tidal waves of globalization, surrounded by a new social landscape marked by unabashed commodification, and stunned by a drastically reconfigured socialist state infrastructure.
The contributors to Whither China? describe how, instead of spearheading the popular-mandated and state-sanctioned project of modernization, intellectuals now find themselves caught amid rapidly changing structures of economic, social, political, and cultural relations that are both global in nature and local in an irreducibly political sense. Individual essays interrogate the space of Chinese intellectual production today, lay out the issues at stake, and cover major debates and discursive interventions from the 1990s. Those who write within the Chinese context are joined by Western observers of contemporary Chinese cultural and intellectual life. Together, these two groups undertake a truly international intellectual struggle not only to interpret but to change the world.

1. The Making of the Post-Tiananmen Intellectual Field: A Critical Overview / Xudong Zhang 1

Part I. Against the Neoliberal Dogma: Four Arguments from China

3. Whither China? The Discourse on Property Rights Reform in China / Zhiyuan Chi 103

4. The Changing Role of Government in China / Shaoguang Wang 123

5. Contemporary Chinese Thought and the Question of Modernity / Wang Hui 161

Part II. In the Global Context