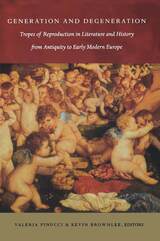 This distinctive collection explores the construction of genealogies—in both the biological sense of procreation and the metaphorical sense of heritage and cultural patrimony. Focusing specifically on the discourses that inform such genealogies, Generation and Degeneration moves from Greco-Roman times to the recent past to retrace generational fantasies and discords in a variety of related contexts, from the medical to the theological, and from the literary to the historical.
The discourses on reproduction, biology, degeneration, legacy, and lineage that this book broaches not only bring to the forefront concepts of sexual identity and gender politics but also show how they were culturally constructed and reconstructed through the centuries by medicine, philosophy, the visual arts, law, religion, and literature. The contributors reflect on a wide range of topics—from what makes men “manly” to the identity of Christ’s father, from what kinds of erotic practices went on among women in sixteenth-century seraglios to how men’s hemorrhoids can be variously labeled. Essays scrutinize stories of menstruating males and early writings on the presumed inferiority of female bodily functions. Others investigate a psychomorphology of the clitoris that challenges Freud’s account of lesbianism as an infantile stage of sexual development and such topics as the geographical origins of medicine and the materialization of genealogy in the presence of Renaissance theatrical ghosts.
This collection will engage those in English, comparative, Italian, Spanish, and French studies, as well as in history, history of medicine, and ancient and early modern religious studies.

Valeria Finucci is Associate Professor of Italian at Duke University. She is the editor of Renaissance Transactions: Ariosto and Tasso, also published by Duke University Press and the author of The Lady Vanishes.

Kevin Brownlee is Professor of French and Italian at the University of Pennsylvania and the author of Poetic Identity in Guillaume de Machau.

REVIEWS
“The glory of this collection is the way it tackles quite abstract issues corporally. It reminds the reader how fundamental is the relation between human physiology and human ideas of history.”—Susan Noakes, author of Timely Reading: Between Exegesis and Interpretation


“[This book’s] ensemble of motifs is not simply cast in currently fashionable psychoanalytical language. It displays a wide array of critical perspectives yet a homogeneity of viewpoints and ideological bents occur through its disparate contributions. A truly unified piece of scholarship.”— Giuseppe F. Mazzotta, author of The Worlds of Petrarch

Generation, Degeneration, Regeneration: Original Sin and the Conception of Jesus in the Polemic between Augustine and Julian of Eclanum / Elizabeth A. Clark

2. Boundaries of Sex and Gender

The Psychomorphology of the Clitoris, or The Reemergence of the Tribade in English Culture / Valerie Traub

Incest and Agency: The Case of Elizabeth I / Maureen Quilligan

4. The Politics of Inheritance

In Search of the Origins of Medicine: Egyptian Wisdom and Some Renaissance Physicians / Nancy G. Siraisi

Hauntings: The Materiality of Memory on the Renaissance Stage / Peter Stallybrass