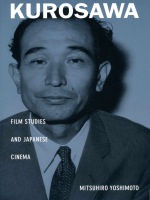 The films of Akira Kurosawa have had an immense effect on the way the Japanese have viewed themselves as a nation and on the way the West has viewed Japan. In this comprehensive and theoretically informed study of the influential director’s cinema, Mitsuhiro Yoshimoto definitively analyzes Kurosawa’s entire body of work, from 1943’s Sanshiro Sugata to 1993’s Madadayo. In scrutinizing this oeuvre, Yoshimoto shifts the ground upon which the scholarship on Japanese cinema has been built and questions its dominant interpretive frameworks and critical assumptions.
Arguing that Kurosawa’s films arouse anxiety in Japanese and Western critics because the films problematize Japan’s self-image and the West’s image of Japan, Yoshimoto challenges widely circulating clichés about the films and shows how these works constitute narrative answers to sociocultural contradictions and institutional dilemmas. While fully acknowledging the achievement of Kurosawa as a filmmaker, Yoshimoto uses the director’s work to reflect on and rethink a variety of larger issues, from Japanese film history, modern Japanese history, and cultural production to national identity and the global circulation of cultural capital. He examines how Japanese cinema has been “invented” in the discipline of film studies for specific ideological purposes and analyzes Kurosawa’s role in that process of invention. Demonstrating the richness of both this director’s work and Japanese cinema in general, Yoshimoto’s nuanced study illuminates an array of thematic and stylistic aspects of the films in addition to their social and historical contexts.
Beyond aficionados of Kurosawa and Japanese film, this book will interest those engaged with cultural studies, postcolonial studies, cultural globalization, film studies, Asian studies, and the formation of academic disciplines.

Mitsuhiro Yoshimoto is Associate Professor of Japanese, Cinema, and Comparative Literature at the University of Iowa.

REVIEWS
“A tour-de-force reading of Kurosawa’s films. Yoshimoto adds greatly to current Kurasawa scholarship and to situating the construct ‘Japanese Cinema’ in a way that it has not been situated before.”—E. Ann Kaplan, author of Looking for the Other: Feminism, Film, and the Imperial Gaze


“Yoshimoto’s Kurosawa is destined to take its place along with the most important achievements of cinema studies, which is to say that it is a book about something more than cinema itself. Yet it offers a stimulating, running commentary on the films that makes one want to see them all over again, while also offering a new theory of auteurship as collective negotiation. This is a grand performance sustained by a voice of rare authority.”—Fredric Jameson

I Japanese Cinema in Search of a Discipline 7

II The Films of Kurosawa Akira 51

Kurosawa Criticism and the Name of the Author 53

The Men Who Tread on the Tiger’s Tail 93

No Regrets for Our Youth 114

Record of a Living Being 246