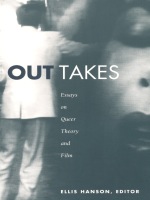 This collection brings together the work of both film scholars and queer theorists to advance a more sophisticated notion of queer film criticism. While the “politics of representation” has been the focus of much previous gay and lesbian film criticism, the contributors to Out Takes employ the approaches of queer theory to move beyond conventional readings and to reexamine aspects of the cinematic gaze in relation to queer desire and spectatorship.

The essays examine a wide array of films, including Calamity Jane, Rear Window, The Hunger, Heavenly Creatures, and Bound , and discuss such figures as Doris Day, Elizabeth Taylor, and Alfred Hitchcock. Divided into three sections, the first part reconsiders the construction of masculinity and male homoerotic desire—especially with respect to the role of women—in classic cinema of the 1940s and 1950s. The second section offers a deconstructive consideration of lesbian film spectatorship and lesbian representation. Part three looks at the historical trajectory of independent queer cinema, including works by H.D., Kenneth Anger, and Derek Jarman.

By exploring new approaches to the study of sexuality in film, Out Takes will be useful to scholars in gay and lesbian studies, queer theory, and cinema studies.

Ellis Hanson is Assistant Professor of English at Cornell University.

Queering the Deal: On the Road with Hope and Crosby / Steven Cohan

The Queer Aesthete, the Diva, and The Red Shoes / Alexander Doty

"That Ain't All She Ain't": Doris Day and Queer Performativity / Eric Savoy