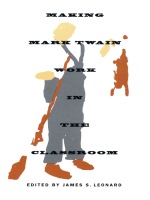 How does one teach Mark Twain’s Huckleberry Finn, a book as controversial as it is central to the American literary canon? This collection of essays edited by James S. Leonard offers practical classroom methods for instructors dealing with the racism, the casual violence, and the role of women, as well as with structural and thematic discrepancies in the works of Mark Twain.
The essays in Making Mark Twain Work in the Classroom reaffirm the importance of Twain in the American literature curriculum from high school through graduate study. Addressing slavery and race, gender, class, religion, language and ebonics, Americanism, and textual issues of interest to instructors and their students, the contributors offer guidance derived from their own demographically diverse classroom experiences. Although some essays focus on such works as A Connecticut Yankee in King Arthur’s Court and The Innocents Abroad, most discuss the hotly debated Adventures of Huckleberry Finn, viewed alternately in this volume as a comic masterpiece or as evidence of Twain’s growing pessimism—but always as an effective teaching tool.
By placing Twain’s work within the context of nineteenth-century American literature and culture, Making Mark Twain Work in the Classroom will interest all instructors of American literature. It will also provoke debate among Americanists and those concerned with issues of race, class, and gender as they are represented in literature.

James S. Leonard is Professor of English at The Citadel. He is coauthor of The Fluent Mundo: Wallace Stevens and the Structure of Reality and coeditor of Satire or Evasion? Black Perspectives on Huckleberry Finn, also published by Duke University Press.

REVIEWS
&ldquo;A wonderful tool. This volume offers a wealth of resources from a range of critical perspectives.&rdquo;&mdash;Steven Mailloux, University of California, Irvine


&ldquo;This book makes the case, for those who still need to be convinced, that Mark Twain needs to be taught for all of the insight his work provides into our past as well as our present.&rdquo;&mdash;Rhett Jones, Brown University


“As someone who taught Mark Twain for almost forty years, I flattered myself by thinking I knew what I was doing. Yet I can say without hesitation that, whatever I thought I knew, I was much instructed by Making Mark Twain Work in the Classroom. This book is a significant addition to the mass of materials available on Mark Twain.”—James M. Cox, Dartmouth College

Who's Teaching Mark Twain, and How? / James S. Leonard

From Innocence to Death: An Approach to Teaching Twain / Dennis W. Eddings

Parody and Satire as Explorations of Culture in The Innocents Abroad / James E. Caron

A Connecticut Yankee in the Postmodern Classroom / James S. Leonard

"Blame de pint! I reck'n I knows what I knows": Ebonics, Jim, and New Approaches to Understanding Adventures of Huckleberry Finn / Jocelyn Chadwick-Joshua

III. Playing to the Audience

On Teaching Huck in the Sophomore Survey / Victor Doyno

To Justify the Ways of Twain to Students: Teaching Adventures of Huckleberry Finn to Culturally Diverse Students in an Urban Southern Community College / Joseph A. Alvarez

"When I read this book as a child . . . the ugliness was pushed aside": Adult Students Read and Respond to Adventures of Huckleberry Finn / Michael J. Kiskis