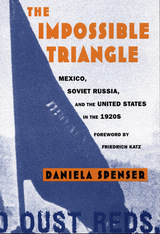 During the 1920s, Mexico was caught in a diplomatic struggle between the ideologies of two strong states. In The Impossible Triangle Daniela Spenser explores the tangled relationship between Russia and Mexico in the years following their own dramatic revolutions, as well as the role played by the United States during this turbulent period. Bringing together Mexican, Soviet, and North American (as well as British) perspectives, Spenser shows how the convergence of each country’s domestic and foreign policies precluded them from a harmonious triangular relationship.
Based on documents from the archives of several nations—including reports by former Mexican diplomats in Moscow that have never before been studied—the book analyzes the Mexican government’s motivation for establishing relations with the Soviet Union in the face of continued imperialist pressure and harsh opposition from the United States. After explaining how Mexico established diplomatic ties with the Soviet Union in 1924 in an attempt to broaden the spectrum of its alliances after several years of uneven relations with the United States, Spenser reveals the troubled nature of the relationship that ensued. Soviet policy toward Mexico was characterized by a series of profound contradictions, varying from neglect to strong involvement in Mexican politics and the belief that Mexico could become a center of world revolution. Working to resolve and explain these contradictions, Spenser explores how, despite U.S. objections to Mexico’s relations with the Soviet Union, Mexico continued its association with the Soviets until the United States adopted the Good Neighbor Policy and softened its stance toward Mexico’s revolutionary program after 1927.
With a foreword by Friedrich Katz and illustrated by illuminating photographs, The Impossible Triangle contributes to an understanding of the international dimension of the Mexican revolution. It will interest students and scholars of history, revolutionary theory, political science, diplomacy, and international relations.

REVIEWS
“The Impossible Triange succeeds on many levels, but perhaps none more than in its innovative trilateral approach. The Mexico that emerges from Spenser’s narrative is both object—of the unequal struggle for influence between the United States and the Soviet Union—and subject, capable of dealing with these two ‘courtiers’ on its own terms. This engagingly-told story reminds us of the radical contingencies thrown up by the Bolshevik Revolution and how that revolution permanently altered the conduct of international relations.”—Lewis Siegelbaum, Michigan State University


“The Impossible Triangle documents a comedy of errors that tells us how, in
similar unforeseen situations, before pursuing reality, every diplomacy pursues its own phantoms.”—Adolfo Gilly, Universidad Nacional Autónoma de México

1 The United States in Search of Its Mexican Policy 9

5 The Soviets Misunderstand Their Meixcan Friend 95

6 Mexico at the Crossroads 113

7 The United States as Good Neighbor 133

8 The Ideological Excesses of the Comintern 152

9 The Break in relations between Mexico and the USSR 170