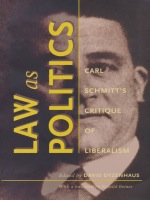 While antiliberal legal theorist Carl Schmitt has long been considered by Europeans to be one of this century’s most significant political philosophers, recent challenges to the fundamental values of liberal democracies have made Schmitt’s writings an unavoidable subject of debate in North America as well. In an effort to advance our understanding not only of Schmitt but of current problems of liberal democracy, David Dyzenhaus presents translations of classic German essays on Schmitt alongside more recent writings by distinguished political theorists and jurists. Neither a defense of nor an attack on Schmitt, Law as Politics offers the first balanced response to his powerful critique of liberalism.
One of the major players in the 1920s debates, an outspoken critic of the Versailles Treaty and the Weimar Constitution, and a member of the Nazi party who provided juridical respectability to Hitler’s policies, Schmitt contended that people are a polity only to the extent that they share common enemies. He saw the liberal notion of a peaceful world of universal citizens as a sheer impossibility and attributed the problems of Weimar to liberalism and its inability to cope with pluralism and political conflict. In the decade since his death, Schmitt’s writings have been taken up by both the right and the left and scholars differ greatly in their evaluation of Schmitt’s ideas. Law as Politics thematically organizes in one volume the varying engagements and confrontations with Schmitt’s work and allows scholars to acknowledge—and therefore be in a better position to negotiate—an important paradox inscribed in the very nature of liberal democracy.
Law as Politics will interest political philosophers, legal theorists, historians, and anyone interested in Schmitt’s relevance to current discussions of liberalism.

David Dyzenhaus is Professor of Law and Philosophy at the University of Toronto and author of Legality and Legitimacy: Carl Schmitt, Hans Kelsen, and Hermann Heller in Weimar.

REVIEWS
“Law as Politics reveals the full force of Schmitt’s challenge to the pieties of liberal thought, as well as providing ample ammunition for those eager to meet it. In so doing, it significantly elevates the level of the English-language discussion of this powerful and troubling thinker.”—Martin Jay, University of California at Berkeley


&ldquo;Everybody interested in the workings of the modern state in good and hard times and its prospects for the future will profit from reading these essays on this famous and infamous German legal theorist.&rdquo;&mdash;Winfried Bruger, Universit&auml;t Heidelberg

PART I: POLITICAL THEORY AND LAW

The Concept of the Political: A Key to Understanding Carl Schmitt’s Constitutional Theory / Ernst-Wolfgang Bockenforde

From Legitimacy to Dictatorship — and Back Again: Leo Strauss’s Critique of the Anti-Liberalism of Carl Schmitt / Ellen Kennedy

Pluralism and the Crisis of Parliamentary Democracy / Dominique Leydet

Carl Schmitt and the Paradox of Liberal Democracy / Chantal Mouffe