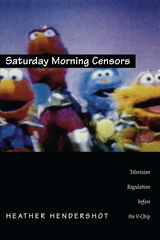 Many parents, politicians, and activists agree that there’s too much violence and not enough education on children’s television. Current solutions range from the legislative (the Children’s Television Act of 1990) to the technological (the V-chip). Saturday Morning Censors examines the history of adults’ attempts to safeguard children from the violence, sexism, racism, and commercialism on television since the 1950s. By focusing on what censorship and regulation are and how they work—rather than on whether they should exist—Heather Hendershot shows how adults use these processes to reinforce their own ideas about childhood innocence.
Drawing on archival studio material, interviews with censors and animators, and social science research, Hendershot analyzes media activist strategies, sexism and racism at the level of cartoon manufacture, and the product-linked cartoons of the 1980s, such as Strawberry Shortcake and Transformers. But in order to more fully examine adult reception of children’s TV, she also discusses “good” programs like Sesame Street and Fat Albert and the Cosby Kids. Providing valuable historical context for debates surrounding such current issues as the V-chip and the banning of Power Rangers toys in elementary schools, Saturday Morning Censors demonstrates how censorship can reveal more fears than it hides.
Saturday Morning Censors will appeal to educators, parents, and media activists, as well as to those in cultural studies, television studies, gender studies, and American social history.

REVIEWS
“Saturday Morning Censors makes an important contribution to those interested in children’s media culture as well as to those concerned with censorship practices in the U. S.”—Marsha Kinder, University of Southern California


“This marvelous book speaks not only to debates about children and media, but also to larger debates about censorship and social power. Heather Hendershot promises to be one of the most significant voices in the next generation of American cultural studies.”—Henry Jenkins, editor of The Children’s Culture Reader