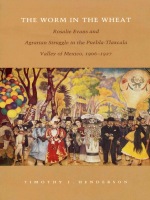 The Worm in the Wheat is a compelling tale of political intrigue, violence, shifting allegiances, extreme poverty, and the recalcitrance of one woman. Above all, it is a multileveled interpretation of the Mexican revolution and the ultimate failure of agrarian reform. Timothy J. Henderson recounts the story of Rosalie Evans, a woman who lost her life defending her Mexican hacienda in defiance of confiscation decrees. This dramatic narrative is populated with many diverse actors: Mexican, British, and American officials, soldiers, rebel leaders, bureaucrats, peasants, vigilantes, and the unforgettable figure of Evans herself.
In a world where power and wealth are distributed unevenly and where revolutionary ideas aiming to right the balance continue to proliferate, it is essential, Henderson claims, to understand the revolutionary process not as a philosophical abstraction but as intimate human drama. This book, by providing a detailed study of a single case, sheds invaluable light on this process and on the making of modern Mexico. Incorporating extensive primary research, Henderson describes the complexity of international, national, state, and local politics and the corresponding diverse responses to this historic attempt at agrarian reform.
The Worm in the Wheat will be informative reading for those interested in the modern history of Mexico, students of social movements and revolution, Latin Americanists, and scholars of agrarian history.

Timothy J. Henderson is Assistant Professor of History at Auburn University at Montgomery.


&ldquo;The importance of this book goes beyond a regional study and makes a large contribution to the crucial question of the agrarian movements during the Revolution. . . . It is also quite wonderfully written, as engrossing as a novel.&rdquo;&mdash;Linda B. Hall, University of New Mexico