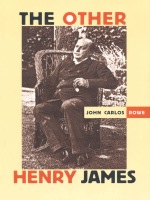 In The Other Henry James, John Carlos Rowe offers a new vision of Henry James as a social critic whose later works can now be read as rich with homoerotic suggestiveness. Drawing from recent work in queer and feminist theory, Rowe argues that the most fruitful approach to James today is one that ignores the elitist portrait of the formalist master in favor of the writer as a vulnerable critic of his own confused and repressive historical moment.
Rowe traces a particular development in James’s work, showing how in his early writings James criticized women’s rights, same-sex relations, and other social and political trends now identified with modern culture; how he ambivalently explored these aspects of modernity in his writings of the 1880s; and, later, how he increasingly identified with such modernity in his heretofore largely ignored or marginally treated fiction of the 1890s. Building on recent scholarship that has shown James to be more anxious about gender roles, more conflicted, and more marginal a figure than previously thought, Rowe argues that James—through his treatment of women, children, and gays—indicts the values and conventions of the bourgeoisie. He shows how James confronts social changes in gender roles, sexual preferences, national affiliations, and racial and ethnic identifications in such important novels as The American, The Tragic Muse, What Maisie Knew, and In the Cage, and in such neglected short fiction as “The Last of the Valerii,” “The Death of the Lion,” and “The Middle Years.”
Positioning James’s work within an interpretive context that pits the social and political anxieties of his day against the imperatives of an aesthetic ideology, The Other Henry James will engage scholars, students, and teachers of American literature and culture, gay literature, and queer theory.

John Carlos Rowe is Professor of English at the University of California, Irvine, and author of numerous books, including The Theoretical Dimensions of Henry James.

TABLE OF CONTENTS
Contents
Preface
Introduction: Henry James and Critical Theory
Chapter 1. Swept Away: Henry James, Margaret Fuller, and "The Last of the Valerii"
Chapter 2. A Phantom of the Opera: Christopher Newman's Unconscious in The American
Chapter 3. Acting Lessons: Racial, Sexual, and Aesthetic Politics in The Tragic Muse
Chapter 4. Textual Preference: James's Literary Defenses against Sexuality in "The Middle Years" and "The Death of the Lion"
Chapter 5. The Portrait of a Small Boy as a Young Girl: Gender Trouble in What Maisie Knew
Chapter 6. Spectral Mechanics: Gender, Sexuality, and Work in In the Cage
Conclusion: Henry James and the Art of Teaching
Notes
Index
REQUEST ACCESSIBLE FILE