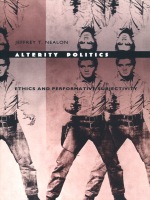 In conventional identity politics subjective differences are understood negatively, as gaps to be overcome, as lacks of sameness, as evidence of failed or incomplete unity. In Alterity Politics Jeffrey T. Nealon argues instead for a concrete and ethical understanding of community, one that requires response, action, and performance instead of passive resentment and unproductive mourning for a whole that cannot be attained.

While discussing the work of others who have refused to thematize difference in terms of the possibility or impossibility of sameness—Levinas, Butler, Derrida, Foucault, Deleuze, Guattari, Zizek, Jameson, Heidegger, Bakhtin—Nealon argues that ethics is constituted as inexorable affirmative response to different identities, not through an inability to understand or totalize the other. Alterity Politics combines this theoretical itinerary with crucial discussions of specific and diverse sites of literary and cultural production—the work of William S. Burroughs, Amiri Baraka, Andy Warhol, Ishmael Reed, Rush Limbaugh, and Vincent Van Gogh—along with analyses of the social formation of subjects as found in identity politics, and in multicultural and whiteness studies. In the process, Nealon takes on a wide variety of issues including white male anger, the ethical questions raised by drug addiction, the nature of literary meaning, and the concept of “becoming-black.”

In seeking to build an ethical structure around poststructuralist discourse and to revitalize the applied use of theoretical concepts to notions of performative identity, Alterity Politics marks a decisive intervention in literary theory, cultural studies, twentieth-century philosophy, and performance studies.

Jeffrey T. Nealon is Associate Professor of English at Pennsylvania State University and is author of Double Reading: Postmodernism after Deconstruction.

REVIEWS
“I do not know of any other book in ethical theory that will so quickly orient a reader just trying to comprehend the field, while also making arguments that those immersed in the field are going to have to take into account. Alterity Politics is a superb book, one which provides an education in contemporary theory that will benefit enormously those who read it.”—John McGowan, University of North Carolina at Chapel Hill


&ldquo;In a new and stimulating manner, Jeffrey Nealon confronts precisely those questions that have been of the most central importance in literary studies and does not rest content with the commonly articulated answers to these questions.&rdquo;&mdash;Steven Shaviro, University of Washington