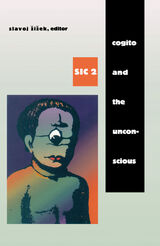 The Cartesian cogito—the principle articulated by Descartes that "I think, therefore I am"—is often hailed as the precursor of modern science. At the same time, the cogito's agent, the ego, is sometimes feared as the agency of manipulative domination responsible for all present woes, from patriarchal oppression to ecological catastrophes. Without psychoanalyzing philosophy, Cogito and the Unconscious explores the vicissitudes of the cogito and shows that psychoanalyses can render visible a constitutive madness within modern philosophy, the point at which "I think, therefore I am" becomes obsessional neurosis characterized by "If I stop thinking, I will cease to exist."

Noting that for Lacan the Cartesian construct is the same as the Freudian "subject of the unconscious," the contributors follow Lacan's plea for a psychoanalytic return to the cogito. Along the path of this return, they examine the ethical attitude that befits modern subjectivity, the inherent sexualization of modern subjectivity, the impasse in which the Cartesian project becomes involved given the enigmatic status of the human body, and the Cartesian subject's confrontation with its modern critics, including Althusser, Bataille, and Dennett. In a style that has become familiar to Žižek's readers, these essays bring together a strict conceptual analysis and an approach to a wide range of cultural and ideological phenomena—from the sadist paradoxes of Kant's moral philosophy to the universe of Ayn Rand's novels, from the question "Which, if any, is the sex of the cogito?" to the defense of the cogito against the onslaught of cognitive sciences.

Challenging us to reconsider fundamental notions of human consciousness and modern subjectivity, this is a book whose very Lacanian orthodoxy makes it irreverently transgressive of predominant theoretical paradigms. Cogito and the Unconscious will appeal to readers interested in philosophy, psychoanalysis, cultural studies, and theories of ideology.

Slavoj Žižek is Senior Researcher at the Institute for Social Sciences at the University of Ljubljana, Slovenia. He is a coeditor of Gaze and Voice as Love Objects and author of Tarrying with the Negative, both published by Duke University Press.