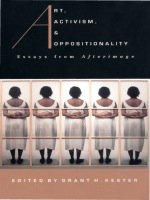 There is a common perception in the arts today that overtly activist art—often seen to sacrifice an aesthetic pleasure for a subversive one—is no longer in fashion. In bringing together sixteen of the most important essays on activist and community-based art from the pages of Afterimage—one of the most influential journals in the media and visual arts fields for more than twenty-five years—Grant H. Kester demonstrates that activist art, far from being antithetical to the true meaning of the aesthetic, can be its most legitimate expression.

Forging a style of criticism where aesthetic, critical, theoretical, and activist concerns converge, Afterimage has shaped American debates around the politics of visual production and arts education while offering a voice to politically involved artists and scholars. Art, Activism, and Oppositionality insists not only on the continuing relevance of an activist stance to contemporary art practice and criticism, but also on the significance of an engaged art practice that is aligned with social or political activism. With essays that span fifteen years—roughly from Ronald Reagan’s 1980 presidential win to the 1994 Republican victories in Congress, a period marked by waning public support for the arts and growing antagonism toward activist art—Art, Activism, and Oppositionality confronts issues ranging from arts patronage, pedagogy, and the very definitions of art and activism to struggles involving AIDS, reproductive rights, sexuality, and racial identity.

Grant H. Kester is Assistant Professor of Art History at Washington State University and was the editor of Afterimage from 1990 to 1995.

REVIEWS
“This collection is a real testimonial to the intelligence of the editing of Afterimage, a journal that has showcased throughtful critics and commentators for years.”—Patricia Aufderheide, American University

The Politics of Patronage

Enlightened Self-Interest: The Avant-Garde in the '80s / Richard Bolton 23

The Mythology of Difference: Vulgar Identity Politics at the Whitney / Charles A. Wright Jr. 76

Whose Multiculturalism? PBS, the Public, and Privilege / Mable Haddock and Chiquita Mullins Lee 136

Video Activism and Critical Pedagogy: Sexuality at the End of the Rainbow Curriculum / Brian Goldfarb 148

Early Newsreel: The Construction of a Political Imaginary for the Left / Michael Renov 199