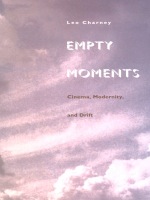 In Empty Moments, Leo Charney describes the defining quality of modernity as “drift”—the experience of being unable to locate a stable sense of the present. Through an exploration of artistic, philosophical, and scientific interrogations of the experience of time, Charney presents cinema as the emblem of modern culture’s preoccupation with the reproduction of the present.
Empty Moments creates a catalytic dialogue among those who, at the time of the invention of film, attempted to define the experience of the fleeting present. Interspersing philosophical discussions with stylistically innovative prose, Charney mingles Proust’s conception of time/memory with Cubism’s attempt to interpret time through perspective and Surrealism’s exploration of subliminal representations of the present. Other topics include Husserl’s insistence that the present can only be fantasy or fabrication and the focus on impossibility, imperfection, and loss in Kelvin’s laws of thermodynamics. Ultimately, Charney’s work hints at parallels among such examples, the advent and popularity of cinema, and early film theory.
A book with a structural modernity of its own, Empty Moments will appeal to those interested in cinema and its history, as well as to other historians, philosophers, literary, and cultural scholars of modernity.

Leo Charney is coeditor of Cinema and the Invention of Modern Life.

REVIEWS
&ldquo;An intense and dazzling encounter with the effects that characterize modernism. This book is written with craft, insight, and care. Its creative form opens new and contemporary perspectives on the modernist past.&rdquo;&mdash;Tom Conley, Harvard University


“Elegant and interesting, Empty Moments will be widely and quickly recognized as a distinguished and important book.”—Ross Chambers, University of Michigan