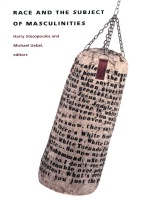 Although in recent years scholars have explored the cultural construction of masculinity, they have largely ignored the ways in which masculinity intersects with other categories of identity, particularly those of race and ethnicity. The essays in Race and the Subject of Masculinities address this concern and focus on the social construction of masculinity—black, white, ethnic, gay, and straight—in terms of the often complex and dynamic relationships among these inseparable categories.
Discussing a wide range of subjects including the inherent homoeroticism of martial-arts cinema, the relationship between working-class ideologies and Elvis impersonators, the emergence of a gay, black masculine aesthetic in the works of James Van der Zee and Robert Mapplethorpe, and the comedy of Richard Pryor, Race and the Subject of Masculinities provides a variety of opportunities for thinking about how race, sexuality, and "manhood" are reinforced and reconstituted in today’s society. Editors Harry Stecopoulos and Michael Uebel have gathered together essays that make clear how the formation of masculine identity is never as obvious as it might seem to be. Examining personas as varied as Eddie Murphy, Bruce Lee, Tarzan, Malcolm X, and Andre Gidé, these essays draw on feminist critique and queer theory to demonstrate how cross-identification through performance and spectatorship among men of different races and cultural backgrounds has served to redefine masculinity in contemporary culture. By taking seriously the role of race in the making of men, Race and the Subject of Masculinities offers an important challenge to the new studies of masculinity.

REVIEWS
"These essays are well researched, beautifully contextualized in relation to previous work in pertinent fields, and engagingly written. Race and the Subject of Masculinities will be extremely useful to scholars and critics working in gender studies."—Phillip Brian Harper, New York University

Men in Color: Introducing Race and the Subject of Masculinities / Michael Uebel 1

"As Thoroughly Black as the Most Faithful Philanthropist Could Desire": Erotics of Race in Higginson's Army Life in a Black Regiment / Christopher Looby 71

III. Visualizing Race and the Subject of Masculinities

"The Cool Pose": Intersectionality, Masculinity, and Quiescence in the Comedy and Films of Richard Pryor and Eddie Murphy / Herman Beavers 253

Fists of Fury: Discourses of Race and Masculinity in the Martial Arts Cinema / Yvonne Tasker 315

Pecs and Reps: Muscling in on Race and the Subject of Masculinities / Deborah E. McDowell 361