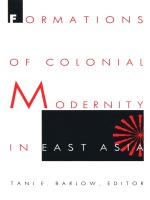 The essays in Formations of Colonial Modernity in East Asia challenge the idea that notions of modernity and colonialism are mere imports from the West, and show how colonial modernity has evolved from and into unique forms throughout Asia. Although the modernity of non-European colonies is as indisputable as the colonial core of European modernity, until recently East Asian scholarship has tried to view Asian colonialism through the paradigm of colonial India (for instance), failing to recognize anti-imperialist nationalist impulses within differing Asian countries and regions.
Demonstrating an impatience with social science models of knowledge, the contributors show that binary categories focused on during the Cold War are no longer central to the project of history writing. By bringing together articles previously published in the journal positions: east asia cultures critique, editor Tani Barlow has demonstrated how scholars construct identity and history, providing cultural critics with new ways to think about these concepts—in the context of Asia and beyond.
Chapters address topics such as the making of imperial subjects in Okinawa, politics and the body social in colonial Hong Kong, and the discourse of decolonization and popular memory in South Korea. This is an invaluable collection for students and scholars of Asian studies, postcolonial studies, and anthropology.

Tani E. Barlow is a historian of modern China, teaching in the women’s studies program at the University of Washington.