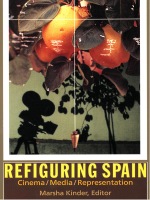 In Refiguring Spain, Marsha Kinder has gathered a collection of new essays that explore the central role played by film, television, newspapers, and art museums in redefining Spain’s national/cultural identity and its position in the world economy during the post-Franco era. By emphasizing issues of historical recuperation, gender and sexuality, and the marketing of Spain’s peaceful political transformation, the contributors demonstrate that Spanish cinema and other forms of Spanish media culture created new national stereotypes and strengthened the nation’s place in the global market and on the global stage.
These essays consider a diverse array of texts, ranging from recent films by Almodóvar, Saura, Erice, Miró, Bigas Luna, Gutiérrez Aragón, and Eloy de la Iglesia to media coverage of the 1993 elections. Francoist cinema and other popular media are examined in light of strategies used to redefine Spain’s cultural identity. The importance of the documentary, the appropriation of Hollywood film, and the significance of gender and sexuality in Spanish cinema are also discussed, as is the discourse of the Spanish media star—whether involving film celebrities like Rita Hayworth and Antonio Banderas or historical figures such as Cervantes. The volume concludes with an investigation of larger issues of government policy in relation to film and media, including a discussion of the financing of Spanish cinema and an exploration of the political dynamics of regional television and art museums. Drawing on a wide range of critical discourses, including feminist, postcolonial, and queer theory, political economy, cultural history, and museum studies, Refiguring Spain is the first comprehensive anthology on Spanish cinema in the English language.

Marsha Kinder is Professor of Critical Studies in the School of Cinema-Television at the University of Southern California. She is author of Blood Cinema: The Reconstruction of National Identity in Spain.

REVIEWS
“The relationships between history, sexuality, and economy as offered by Marsha Kinder in Refiguring Spain are dynamic and mobile. The vision and the implementation of her study are impeccable. She at once configures an order of meaning in the recent past and offers a predictive model for what will continue to happen in the future.”—Tom Conley, Harvard University


“With its original and stimulating theoretical framework, Refiguring Spain complements other recent work dealing with Spanish cinema and media while giving new impetus to these studies.”— Victor Fuentes, University of California, Santa Barbara

The Marketing of Cervantine Magic for a New Global Image of Spain / Dona M. Kercher 99

Out of the Cinematic Closet: Homosexuality in the Films of Eloy de la Iglesia / Stephen Tropiano 157