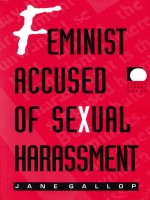 Sexual harassment is an issue in which feminists are usually thought to be on the plaintiff’s side. But in 1993—amid considerable attention from the national academic community—Jane Gallop, a prominent feminist professor of literature, was accused of sexual harassment by two of her women graduate students. In Feminist Accused of Sexual Harassment, Gallop tells the story of how and why she was charged with sexual harassment and what resulted from the accusations. Weaving together memoir and theoretical reflections, Gallop uses her dramatic personal experience to offer a vivid analysis of current trends in sexual harassment policy and to pose difficult questions regarding teaching and sex, feminism and knowledge.
Comparing “still new” feminism—as she first encountered it in the early 1970s—with the more established academic discipline that women’s studies has become, Gallop makes a case for the intertwining of learning and pleasure. Refusing to acquiesce to an imperative of silence that surrounds such issues, Gallop acknowledges—and describes—her experiences with the eroticism of learning and teaching. She argues that antiharassment activism has turned away from the feminism that created it and suggests that accusations of harassment are taking aim at the inherent sexuality of professional and pedagogic activity rather than indicting discrimination based on gender—that antiharassment has been transformed into a sensationalist campaign against sexuality itself.
Feminist Accused of Sexual Harassment offers a direct and challenging perspective on the complex and charged issues surrounding the intersection of politics, sexuality, feminism, and power. Gallop’s story and her characteristically bold way of telling it will be compelling reading for anyone interested in these issues and particularly to anyone interested in the ways they pertain to the university.
AUTHOR BIOGRAPHY

Jane Gallop is Distinguished Professor of English and Comparative Literature at the University of Wisconsin at Milwaukee. She is the author of numerous books, including Thinking Through the Body, The Daughter’s Seduction, and Around 1981: Academic Feminist Literary Theory.