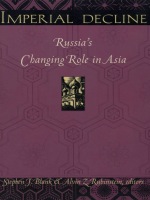 This collection of essays by a distinguished group of international scholars is the first to analyze current Russian policies in China, Japan, and the two Koreas. Although Russia was a rising power in Asia a century ago, historical and political events since then have diverted attention from this potential site of development.
The essays in Imperial Decline describe the major changes that have occurred in Russia’s relations with China, Japan, and South Korea under Boris Yeltin’s presidency, speculating about both Russia’s future in the region and the impact this future could have on relations with the United States. Contributors to this volume demonstrate how incoherent taxation and investment, uncoordinated and contradictory economic policies, runaway inflation and currency instability, and problems of defense now constrain the possibility of Russia expanding its economic influence in the region. This book is essential for students and scholars of international relations, foreign policy, and Russian history.

REVIEWS
“The essays in Imperial Decline cover significant new ground regarding a topic that is certain to grow in importance in the coming months and years.”—Ross H. Munro, Foreign Policy Research Institute


&ldquo;This book presents the latest and best scholarship concerning Russian policy toward Northeast Asia. The individual chapters embody high-quality, original research and will be especially useful to scholars and students in the fields of Russian foreign policy and Asian security.&rdquo;&mdash;Paul Marantz, University of British Columbia

What is Asia to Russia? 5

Russian Foreign Policy in the Chinese Context / Bruce A. Elleman 99

Russia and the United States 211