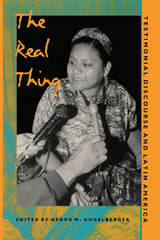 Presented as the authentic testimony of the disenfranchised, the colonized, and the oppressed, testimonio has in the last two decades emerged as one of the most significant genres of Latin America’s post-boom literature. In the political battles that have taken place around the formation of the canon, the testimonio holds a special place: no other single genre of literature has taken up such a large part of current debate. Initially hailed in the 1970s as a genuine form of resistance literature, testimonio has since undergone a significant change in its critical reception. The essays in The Real Thing analyze the testimonio, its history, and its place in contemporary consciousness.
Although the literature of testimony arose on the margins of institutional power and its ends were in large part political change, the canonization of testimonio by the academic Left has moved it from margin to center, ironically bringing about the institutionalization of its transgressive and counter-hegemonic qualities. Discussing Latin American works ranging from Salvadorian writer Roque Dalton’s Miguel Marmol to I . . . Rigoberta Menchu, a work that earned its author a Nobel Prize, this collection explores how critical writing about testimonio has turned into discourse about the institution of academia, the canon, postmodernism and postcolonialism, and the status of Latin American studies generally.