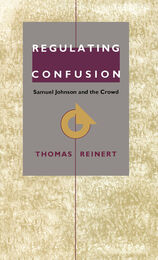 With the urbanization of eighteenth-century English society, moral philosophers became preoccupied with the difference between individual and crowd behavior. In so doing, they set the stage for a form of political thought divorced from traditional moral reflection. In Regulating Confusion Thomas Reinert places Samuel Johnson in the context of this development and investigates Johnson’s relation to an emerging modernity.
Ambivalent about the disruption, confusion, perplexity, and boundless variety apparent in the London of his day, Johnson was committed to the conventions of moral reflection but also troubled by the pressure to adopt the perspective of the crowd and the language of social theory. Regulating Confusion explores the consequences of his ambivalence and his attempt to order the chaos. It discusses his critique of moral generalizations, concept of moral reflection as a symbolic gesture, and account of what happens to the notion of character when individuals, having lost the support of moral convention, become faces in a crowd. Reflecting generally on the relationship between skepticism and political ideology, Reinert also discusses Johnson’s political skepticism and the forms of speculation and action it authorized.
Challenging prevalent psychologizing and humanistic interpretations, Regulating Confusion leaves behind the re-emergent view of Johnson as a reactionary ideologue and presents him in a theoretically sophisticated context. It offers his style of skepticism as a model of poise in the face of confusion about the nature of political truth and personal responsibility and demonstrates his value as a resource for students of culture struggling with contemporary debates about the relationship between literature and politics.
AUTHOR BIOGRAPHY

Thomas Reinert is Assistant Professor of English at the University of North Carolina, Chapel Hill.

REVIEWS
&ldquo;Thomas Reinert has succeeded&mdash;while giving his many predecessors their due&mdash;both in saying entirely new things about Samuel Johnson and also in addressing in an original and stimulating way the question of what it is that changes in eighteenth-century Britain&mdash;what it is that gives that culture its particular &lsquo;modernity.&rsquo;&rdquo;&mdash;Deidre Lynch, State University of New York at Buffalo