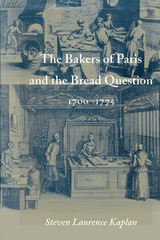 In preindustrial Europe, dependence on grain shaped every phase of life from economic development to spiritual expression, and the problem of subsistence dominated the everyday order of things in a merciless and unremitting way. Steven Laurence Kaplan’s The Bakers of Paris and the Bread Question, 1700–1775 focuses on the production and distribution of France’s most important commodity in the sprawling urban center of eighteenth-century Paris where provisioning needs were most acutely felt and most difficult to satisfy. Kaplan shows how the relentless demand for bread constructed the pattern of daily life in Paris as decisively and subtly as elaborate protocol governed the social life at Versailles.
Despite the overpowering salience of bread in public and private life, Kaplan’s is the first inquiry into the ways bread exercised its vast and significant empire. Bread framed dreams as well as nightmares. It was the staff of life, the medium of communion, a topic of common discourse, and a mark of tradition as well as transcendence. In his exploration of bread’s materiality and cultural meaning, Kaplan looks at bread’s fashioning of identity and examines the conditions of supply and demand in the marketplace. He also sets forth a complete history of the bakers and their guild, and unmasks the methods used by the authorities in their efforts to regulate trade.
Because the bakers and their bread were central to Parisian daily life, Kaplan’s study is also a comprehensive meditation on an entire society, its government, and its capacity to endure. Long-awaited by French history scholars, The Bakers of Paris and the Bread Question, 1700–1775 is a landmark in eighteenth-century historiography, a book that deeply contextualizes, and thus enriches our understanding of one of the most important eras in European history.
AUTHOR BIOGRAPHY

REVIEWS
&ldquo;A landmark in eighteenth-century historiography. The verve and clarity of Kaplan&rsquo;s writing are marvelous. The completeness of the project is admirable; every kind of archival material that might have shed light on the subject has been systematically scoured.&rdquo;&mdash;William M. Reddy, Duke University