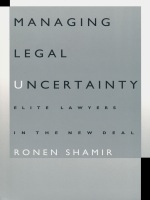 With the New Deal came a dramatic expansion of the American regulatory state. Threatening to undermine many of the traditional roles of the legal system and its actors by establishing a system of administrative law, the new emphasis on federal legislation as a form of social and economic planning ushered in an era of "legal uncertainty." In this study Ronen Shamir explores how elite corporate lawyers and the American Bar Association clashed with academic legal realists over the constitutionality of the New Deal’s legislative program.
Applying the insights of Weber and Bourdieu to the sociology of the legal profession, Shamir shows that elite members of the bar had a keen self-interest in blocking the expansion of administrative law. He dismisses as oversimplified the view that elite lawyers were "hired guns" who argued that New Deal legislation was unconstitutional solely because of their duty to represent their capitalist clients. Instead, Shamir suggests, their alignment with the capitalist class was an incidental result of their attempt to articulate their vision of the law as scientific, apolitical, and judicially oriented—and thereby to defend their own position within the law profession. The academic legal realists on the other side of the constitutional debates criticized the rigidity of the traditional judicial process and insisted that flexibility of interpretation and the uncertainty of legal outcomes was at the heart of the legal system. The author argues that many legal realists, encouraged by the experimental nature of the New Deal, seized an opportunity to improve on their marginal status within the legal profession by moving their discussions from academic circles to the national policy agenda.
AUTHOR BIOGRAPHY

REVIEWS
"Managing Legal Uncertainty offers an original account of lawyers in the New Deal. It challenges conventional wisdom in a provocative and persuasive fashion."—Robert Jerome Glennon, University of Arizona College of Law


"Richly detailed, Managing Legal Uncertainty examines the activities of the organized bar during the period of the New Deal in much greater depth than previous accounts. It will quickly become a standard, both in the legal history of the New Deal, and in the literature on the history of the profession."—Lawrence M. Friedman, Stanford Law School