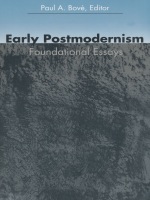 In the decade that followed 1972, the journal boundary 2 consistently published many of the most distinguished and most influential statements of an emerging literary postmodernism. Recognizing postmodernism as a dominant force in culture, particularly in the literary and narrative imagination, the journal appeared when literary critical study in the United States was in a period of theory-induced ferment. The fundamental relations between postmodernism and poststructuralism were being initially examined and the effort to formulate a critical sense of the postmodern was underway. In this volume, Paul A. Bové, the current editor of boundary 2, has gathered many of those foundational essays and, as such, has assembled a basic text in the history of postmodernism.
Essays by noted cultural and literary theorists join with Bové’s contemporary preface to represent the important and unique moment in recent intellectual history when postmodernism was no longer seen primarily as an architectural term, had not yet come to describe the wide range of culture it does now, but was finding power and place in the literary realm. These essays show that the history of postmodernism and its attendant critical theories are both more complex and more deeply bound with literary criticism than often is acknowledged today. Early Postmodernism demonstrates not only the significance of these literary studies, but also the role played by literary critical postmodernism in making possible newer forms of critical and cultural studies.

Paul A. Bové is Professor of English at the University of Pittsburgh and editor of boundary 2, an international journal of literature and culture.

The Detective and the Boundary: Some Notes on the Postmodern Literary Imagination / William V. Spanos 17

The New Gnosticism: Speculation on an Aspect of the Postmodern Novel / Ihab Hassan 77

From Symbolist Thought to Immanence: The Ground of Postmodern American Poetics / Charles Altieri 100

From Heidegger to Derrida to Chance: Doubling and (Poetic) Language / Joseph N. Riddel 207