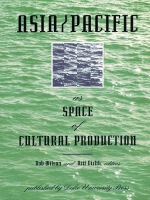 The Pacific, long a source of fantasies for EuroAmerican consumption and a testing ground for the development of EuroAmerican production, is often misrepresented by the West as one-dimensional, culturally monolithic. Although the Asia/Pacific region occupies a prominent place in geopolitical thinking, little is available to readers outside the region concerning the resistant communities and cultures of Pacific and Asian peoples. Asia/Pacific as Space of Cultural Production fills that gap by documenting the efforts of diverse indigenous cultures to claim and reimagine Asia/Pacific as a space for their own cultural production.
From New Zealand to Japan, Taiwan to Hawaii, this innovative volume presents essays, poems, and memoirs by prominent Asia/Pacific writers that resist appropriation by transnational capitalism through the articulation of autonomous local identities and counter-histories of place and community. In addition, cultural critics spanning several locations and disciplines deconstruct representations—particularly those on film and in novels—that perpetuate Asia/Pacific as a realm of EuroAmerican fantasy.
This collection, a much expanded edition of boundary 2, offers a new perception of the Asia/Pacific region by presenting the Pacific not as a paradise or vast emptiness, but as a place where living, struggling peoples have constructed contemporary identities out of a long history of hegemony and resistance. Asia/Pacific as Space of Cultural Production will prove stimulating to readers with an interest in the Asia/Pacific region, and to scholars in the fields of Asian, American, Pacific, postcolonial, and cultural studies.

Rob Wilson is Professor of Literature at the University of California, Santa Cruz and the author of Reimagining the American Pacific.

Arif Dirlik is Professor of History at Duke University and the editor of What Is in a Rim?

Foundations of the American Image of the Pacific / M. Consuelo León 17

Chemical Weapons Discourse in the "South Pacific" / William A. Callahan and Steve Olive 57

Turning It Over / Lawson Fusao Inada 84

Our Sea of Islands / Epeli Hau'ofa 86

From the Politics of Identity to an Alternative Cultural Politics: On Taiwan Primoridal Inhabitants' A-systemic Movement / Chiu Yen Liang (Fred) 120

The Last Frontier: Memories of the Postcolonial Future in Keri Hulme's the bone people / Chris Bongie 226

The Possibility of Imagination in These Islands / Tsushima Yuko (Translated by Geraldine Harcourt; Introduction by Masao Miyoshi) 255

Imaginings in the Empires of the Sun: Japanese Mass Culture in Asia / Leo Ching 262

The Hong Kong Immigrant and the Urban Landscape: Shaping the Transnational Cosmopolitanism in the Era of Pacific Rim Capital / Katharyne Mitchell 284